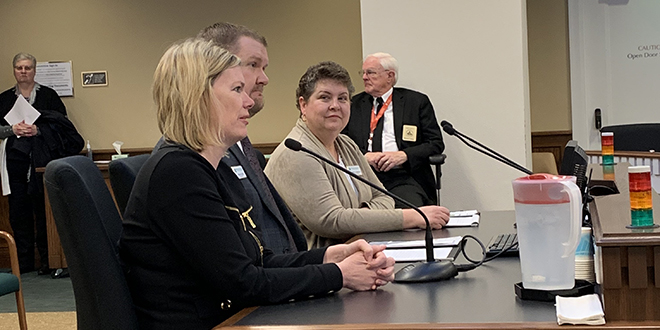 While in Olympia meeting with legislators Jan. 21-22, wheat growers had an opportunity to testify during a House Rural Development, Agriculture and Natural Resources Committee public hearing on HB 2498. (From left) Washington Association of Wheat Growers (WAWG) lobbyist Diana Carlen, WAWG President Ryan Poe and WAWG Past President Marci Green all testified in support of the bill, which would compensate growers if the Washington State Department of Natural Resources (DNR) terminates a lease early under their higher and better use clause. The bill, sponsored by Rep. Chris Corry (R-Yakima), was written with input from grower and cattle groups and with the support of DNR. Poe told legislators that he holds two DNR leases, one of which his family has had for about 50 years. He explained that the DNR land is an integral part of his operation, and due to the rising cost of equipment, he has to spread that cost over as many acres as possible. Although Green’s operation doesn’t currently include any DNR leases, most of their land is leased. She said that being able to count on those leases running through the end of their contract is an important part of any growers’ business plan.

For more information on this hearing, read this article from the Capital Press.