Ag stakeholders bring a taste of Washington to D.C.

The group visited with most members of the state’s Congressional delegation and then held a Taste of Washington reception that featured products from the state’s agricultural industry.

“We are proud of our close ties with WSU and WSDA and being able to jointly visit with elected officials highlights the importance of those relationships,” said Michelle Hennings, WAWG’s executive director. “We all represent different viewpoints and parts of the ag industry that support and benefit from each other, and we can emphasize how important each part of that chain is in keeping the state’s ag industry growing successfully.” 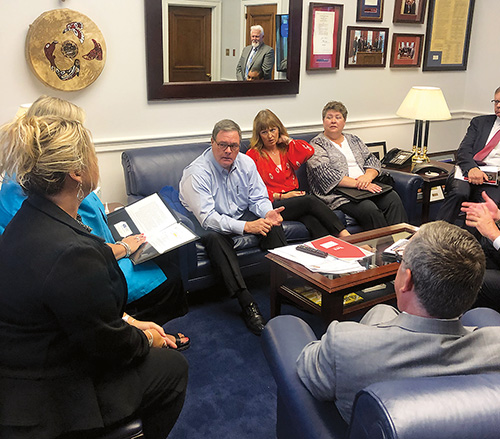 Washington Congressman Denny Heck (third from left) took the time out of his schedule to discuss trade and the rural/urban divide with the Washington agricultural stakeholders.

Besides Hennings, Marci Green, WAWG past president and a Spokane County grower, and Mary Palmer Sullivan, vice president of the Washington Grain Commission, were there, representing the wheat industry. Other commodity groups that made the trip included potatoes, dairy and horticulture.

The group met with Washington Reps. Suzan DelBene (D); Jaime Herrera Beutler (R); Dan Newhouse (R); Cathy McMorris Rodgers (R); Derek Kilmer (D); Kim Schrier (D); Adam Smith (D) and Denny Heck (D). They also met with Sens. Patty Murray (D) and Maria Cantwell (D). Trade, ag research and the disconnect between the rural and urban parts of Washington state were among the topics discussed. They also met with House Ag Committee Ranking Member Mike Conaway (R-Texas) who updated the group on House progress on the U.S.-Mexico-Canada Agreement (USMCA). He encouraged the ag representatives to keep educating Congress on the need for swift ratification of the USMCA and the importance of fair trade agreements. Hennings added that they thanked Conaway for all his work on the 2018 Farm Bill.

With WSU in the group, it was no surprise that the importance of ag research and the need for funding was a topic that came up multiple times, especially when the group met with U.S. Department of Agriculture (USDA) Undersecretary Scott Hutchins. They talked about research priorities and the need for currently open positions to be filled at the Agricultural Research Service (ARS). ARS plays a key role in research that benefits Washington state agriculture, especially the wheat industry, which recently successfully lobbied for funding of an ARS position dedicated to researching low falling numbers. While the funding is in place, there has been a delay in hiring for the position.

In their meeting with Washington Rep. Suzan DelBene (fourth from right), the group discussed trade and ag research.

“We also met with staff from several White House offices, including the National Economic Council, the Office of Public Liaison and the Office of Intergovernmental Affairs,” Hennings said. “We discussed the ARS issues as well as trade in that meeting.”

While on the trip, Hennings and Green held side meetings with several USDA agencies, including the Farm Service Agency (FSA), the Risk Management Agency (RMA) and the National Agricultural Statistics Service (NASS). Staff from the National Association of Wheat Growers joined the WAWG leaders in those meetings. 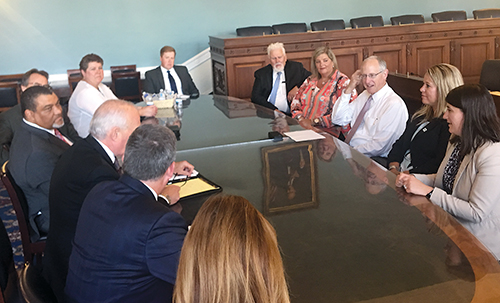 Although he’s not from Washington, Texas Rep. Mike Conaway (third from right), who is also the ranking member on the House Committee on Agriculture, met with the group to update them on House progress on the U.S.-Mexico-Canada Agreement. The group thanked Conaway for all his work on the 2018 Farm Bill.

At FSA, they talked about the upcoming Market Facilitation Program (MFP) payments. While FSA staff couldn’t go into detail, they did say there is a chance that sign-ups for the program could begin in August. See updates on page 14. They also gave general details on how the calculations would work and who would qualify. Farm bill implementation was also touched on, with a tentative farm program sign-up date of September for producers. Decision tools for growers will likely be released around the end of August. At RMA, discussion centered on a proposed quality loss exclusion. RMA officials see that possibly being implemented in time for the 2021 crop year, and they indicated that it will likely be retroactive, as long as a grower filed a notice of loss with RMA at the time.

Over at NASS, Hennings and Green asked officials to consider collecting data from growers on precision ag technology as part of their surveys. NASS indicated that they are researching that idea, but have concerns around data ownership.

“This was a very successful trip, and we appreciate all the work WSU and WSDA did to facilitate it,” Hennings said.