The 2016 Tri-State Grain Growers Convention is in the books. Approximately 450 attendees, speakers and exhibitors filled the ballrooms and meeting rooms of the Coeur d’Alene Resort in Coeur d’Alene, Idaho, last month to network, learn the latest in industry news and maybe do a little early Christmas shopping at the silent and live auctions. 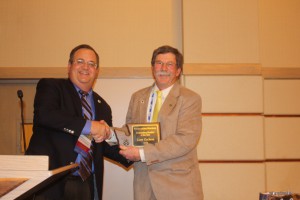 Incoming WAWG President Ben Adams (left) congratulates Larry Cochran, a farmer from Whitman County and a former WAWG president (2014/15), for being selected as the WAWG member of the year.

But amidst all the fun and games, there was some business being conducted. Washington Association of Wheat Growers (WAWG) members came together in an all WAWG committee meeting to review and approve the organization’s resolutions for the coming year. See page 15 for a list of the new and changed resolutions. Later that evening, at the state award’s banquet, a new slate of officers was elected. Ben Adams of Coulee City, Wash., replaced outgoing president Kevin Klein of Edwall, Wash. Fairfield grower Marci Green is the new vice president, and Jeff Shawver of Connell, Wash., comes aboard as secretary/treasurer. 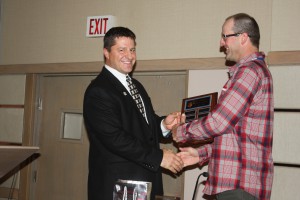 The Benton County wheat growers were honored as the county of the year, and Larry Cochran was named WAWG member of the year.

“I’d like to thank all the members that attended the annual meeting and reviewed and commented on our resolutions,” said Michelle Hennings, WAWG executive director. “Those resolutions help guide the organization in the direction our members want us to go. I’d also like to welcome the new leadership team and congratulate the county and members that were honored. WAWG is a grass-roots organization, and without the active participation of our members, we wouldn’t be nearly as successful as we are in advocating for the Washington wheat industry.”

Also during the awards banquet, Tessa Jantz of Ritzville and Nicholas Schultheis of Colton were officially named next year’s wheat ambassadors. Randy Suess, a wheat grower from Whitman County was recognized for recently being given the Washington State University Alumni Achievement award.

As Kevin Klein prepared to hand the gavel over to incoming president Ben Adams, he told the crowd how encouraging it has been to see younger members becoming more involved in WAWG and the role WAWG is taking at the national level through its active involvement with the National Association of Wheat Growers (NAWG), especially where crop insurance and the farm bill are concerned.

“We should be proud as a Washington state organization for the standards we have set at the national level,” he said, adding praise for WAWG’s partnership with the Washington Grain Commission and how the two organizations have worked together on the industry’s issues.

Other awards handed out during the banquet included the Legislative Action Fund (LAF) winners. All WAWG members who contributed financially to the LAF were entered into a drawing for prizes contributed by the county associations of Adams, Douglas, Spokane and Whitman counties. The winners were:

• Mark Greene who won a wheat canvas; and

• Gary Bailey who won a container of Round-up.

In drawings open to all three states’ members, the following were awarded:

• Doug McIntosh of Lewiston, Idaho, won a night’s stay at the Davenport Grand Hotel for the 2017 convention in the early bird drawing.

• The overall survey winner was Tom Scharff of Davenport, Wash., who won a free registration to the 2017 convention.

• Laura Rea of Milton Freewater, Ore., won the 2016 photo contest. She will receive a free registration to the 2017 convention, and her photo will appear in a future issue of Wheat Life.

A special thanks goes to Chandler Goule, NAWG’s new CEO, who stepped in at the last minute to replace the scheduled emcee, John Phipps, who had to back out due to a family emergency. Goule was named CEO in July of 2016 and was attending the convention as a speaker and to get to know the leaders and members of the three states’ wheat industries.

The staffs of the three wheat grower organizations would like to thank all the members and industry supporters who attended. Feedback is welcome as planning is already underway for the 2017 convention, which will be held at the Davenport Grand Hotel in Spokane Nov. 8-11, 2017.