In recent months, much of the media spotlight has been focused on the North American Free Trade Agreement and the Trans-Pacific Partnership agreement, but negotiations are about to start on another agreement critical to Pacific Northwest agriculture—the Columbia River Treaty between the U.S. and Canada. 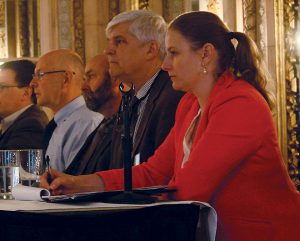 Jill Smail (right), the negotiator for the Columbia River Treaty, led a town hall meeting in Spokane to hear comments and concerns from the public on the treaty.

Jill Smail, the negotiator for the Columbia River Treaty, visited Spokane, Wash., in late April to hold a town hall meeting where Eastern Washington residents had the opportunity to weigh in on the treaty and its objectives. Canada has indicated that they will be ready to start renegotiating the treaty in 2018, and Smail said she has been in regular contact with her Canadian counterpart.

“The treaty has been a model of trans-boundary water resource cooperation since 1964 and serves as a model for other nations seeking to manage the benefits of a shared water resource. We are eager to move forward to help define how Americans and Canadians, including tribes of the U.S. and First Nations in Canada, will continue to mutually benefit from this treaty. I’m confident that as we lay out our respective positions and turn them into a shared vision for the future of the basin with Canada, we can find common ground,” Smail said.

The Columbia River Treaty was implemented as a joint solution between the U.S. and Canada to control flooding and to meet the growing demand for more energy. Under the terms of the treaty, Canada built three dams: Duncan in 1968, Hugh Keenleyside in 1969 and Mica in 1973 to provide storage for more than 15 million acre-feet of water. Libby Dam (1973) on the Kootenai River in Montana was also built as part of the treaty. Both countries would jointly develop an operating plan to use that stored water to control river flows and to meet power objectives. In return, Canada was paid more than $64 million and given a portion of the power generated by the Columbia River dams, called the Canadian Entitlement. Under the provisions of the treaty, either country can terminate it any time on or after September 2024 with 10 years’ advance notice. In December 2013, a regional recommendation was sent to the U.S. Department of State that said the Pacific Northwest and the U.S. would benefit from modernizing the treaty after 2024. Four years later, in December 2017, the State Department announced they would begin negotiations to modernize it.

According to Smail, the objectives of the negotiation team are based on the regional recommendation and include the continued, careful management of flood risk; insuring a reliable, economical power supply; and better addressing the ecosystem. Discussions with Canada will focus on water flowing across the border and treaty storage in Canadian dams.

Many of the public comments at the meeting targeted the absence of the tribes as part of the negotiating team, with one commenter saying they should be at the table as sovereign nations. Other comments included the need to restore salmon to the upper Columbia Basin and to make the ecosystem objective the top priority.

Smail said the State Department looked at various models to determine who would make up the negotiating team and decided to go with a small, focused group. She added that they’ve reached out to the tribes and hope to consult with them as the negotiations progress.

Another side of the river was represented by county commissioners, irrigation district managers and business leaders who pointed out that in the Columbia Basin, whole economies have developed to take advantage of the regulated stream flows. Billion of dollars of goods are moved up and down the river by boat and both municipalities and agriculture pump water from the river. A system with unpredictable stream flows could be economically disastrous for the region, not to mention threatening the cheap, clean and sustainable energy generated by the Columbia River dams.

“Do no harm,” one elected official said.

Smail met with a group of agricultural and rural community stakeholders earlier that day to hear their concerns and ask questions. Many in the group felt that their issues (irrigation, navigation and community interests) had been overlooked in the regional recommendation. For most of the stakeholders, having that uncertainty about how the Columbia River System would operate after 2024 was uppermost on their minds. Marci Green, president of the Washington Association of Wheat Growers, pointed out that Washington state wheat growers ship more than half of their wheat to Portland by barge.

“It’s the most economical and efficient mode of transportation we have. The roads couldn’t handle that extra load,” she said.

In the town hall meeting, there was a general acknowledgement that the issues surrounding the Columbia River Treaty are complex. Smail said they hope to hold quarterly meetings around the region to provide updates on the negotiations.

“We understand the importance and economic contribution to the region of maintaining navigation, recreation, irrigation and municipal and industrial uses of the river,” Smail said. “We also need to determine with Canada how we might build in flexibility needed to adapt to changes based on new information, technology or changes in snow and rainfall patterns.”

Information on the Columbia River Treaty and negotiations is here. The public can also send comments and receive announcements about future town halls by emailing ColumbiaRiverTreaty@state.gov.