In mid-July, officers and staff of the Washington Association of Wheat Growers (WAWG) flew into the other Washington to talk about the impacts of proposed budget cuts to wheat growers. The group jammed more than 20 meetings into four days, including a visit to the White House to meet with Ray Starling, special assistant to the president for agriculture, trade and food assistance.

“This trip was focused on demonstrating to legislators how the Trump Administration’s proposed budget cuts in research, trade and crop insurance will directly impact our growers,” said Michelle Hennings, WAWG’s executive director. “Our members have spoken loudly and clearly that budgetary cuts to these vital programs will not only jeopardize their bottom lines, but would also disrupt the safe, reliable and abundant food supply American consumers currently enjoy.”

The WAWG group was accompanied by Derek Sandison, the Washington State Department of Agriculture (WSDA) director. Representatives from Washington State University (WSU) were also present at many of the meetings. 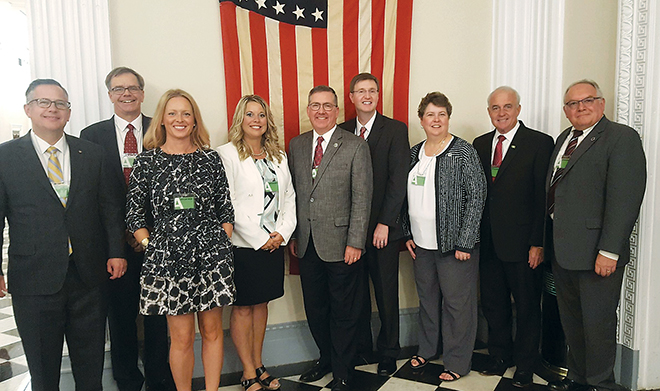 “Having Director Sandison make the trip with us added a great deal of value to our meetings because it showed a solid collaboration between partners in our state,” Hennings said.

One of the group’s other main goals in going to D.C. was to follow up on the Pacific Northwest’s appropriations request for falling numbers research funding. That request is a joint effort by the wheat industry organizations of Washington, Oregon and Idaho. The appropriations request process, which usually takes several years, has been moving quickly since the fall, having passed through the House markup process earlier this month and through the Senate process during the same week as the group’s visit. So far, the committees have approved $1 million in falling number research funding for the Agricultural Research Service. The next step for the request is for it to go to conference where any differences between the House and Senate versions will be hammered out. Hennings said the rapid success of the funding request is due to the support it has received from members of Congress and WAWG’s partners in the wheat industry. 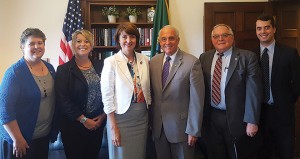 Rep. Cathy McMorris Rodgers (R-Wash.) is one of the legislators helping to move the appropriations request through the process that the WAWG team met with. From left are WAWG Vice President Marci Green; WAWG Executive Director Michelle Hennings; McMorris Rodgers; Derek Sandison, director of the Washington State Department of Agriculture; Jim Moyer, associate dean of research in WSU’s College of Agricultural, Human, and Natural Resource Sciences; and Andrew Annis, policy and affairs coordinator at WSU’s Office of Federal Relations.

“We are fortunate to have congressional leaders from both sides of the aisle who stepped up and supported our request,” she said. “We still have a lot of work to do during conference, but this is a successful start, and we are hoping to end with a huge victory for the wheat industry. There has been a lot of collaboration between the three states’ wheat organizations, the various departments of agriculture and WSU.”

Hennings said on the House side, both Rep. Cathy McMorris Rodgers (R-Wash.) and Rep. Dan Newhouse (R-Wash.) have been instrumental in supporting the request, while Sen. Patty Murray (D-Wash.) has been keeping the push on from the Senate side with support from Sen. Maria Cantwell (D-Wash.).

During the hour-long meeting with the administration’s special assistant, the group talked about food safety, security and demand. The importance of the Pacific Northwest’s export system and trade were also discussed. Representatives from WSU talked about the collaboration that takes place between university researchers and growers.

“One of our messages to him was how important our port system is,” Hennings said. “Nearly $6.8 billion worth of goods are exported through the Pacific Northwest, including many products from the Midwest. He was very receptive to that and seemed to understand our situation.” 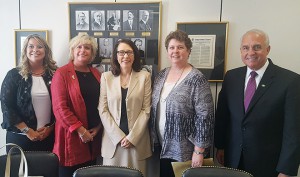 “We talked about everything from GPS down to spray nozzle efficiencies. He reassured us that both the Gulf ports and the Pacific Northwest ports will be included in the administration’s infrastructure package,” Hennings said. “It was an honor to be able to meet with someone so close to the administration, and I feel we’ve been successful in helping to make sure wheat has a voice at the national level.”

Agencies the group met with included the Natural Resources Conservation Service, the Risk Management Agency, the Farm Service Agency, the Grain Inspection, Packers and Stockyards Administration and the Department of the Interior. SAMs/DUNS numbers, actual production history, farm bill, conservation, dams and falling numbers were all were discussed. In addition, the WAWG group was able to hand-deliver an invitation to visit Washington state to Ag Secretary Sonny Perdue.

“Working together with other groups like WSDA and WSU and with our national organizations sends a big message to our elected officials,” Hennings said. “People in D.C. want wheat to tell their story. They want us to give them actual examples of why crop insurance is so important, or why we shouldn’t lose programs that fund overseas market access or foreign market development. This trip was very successful in passing those messages along.”