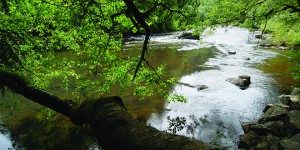 A federal appeals court on Friday morning said that the U.S. government could not begin implementing the controversial “Waters of the U.S.” rule that governs what waterways are subject to federal Clean Water Act permits and which waterways are not.

“This is great news for cattlemen and women and all land users who have been at a loss as to how to interpret this rule,” Phillip Ellis, president of the National Cattlemen’s Beef Association, said in response to the decision by the U.S. Court of Appeals for the 6th Circuit. “A stay by the court has the same effect as an injunction, and this action prevents the EPA and Army Corps from implementing this disastrous rule across the country. In granting the stay, the majority of the court sided with the states that the rule likely fails on both substantive and procedural grounds.”

The rule has been highly unpopular with the farming and ranching community, which views it as an example of government overreach by the Environmental Protection Agency and the U.S. Army Corps of Engineers. Read the rest of the story here.