The Washington state Farm Service Agency (FSA) office has confirmed that thanks to high yields, Eastern Washington wheat growers who elected the Agriculture Risk Coverage County option (ARC-Co) will not be receiving a payment for their 2018 wheat crop.

Only five Washington counties qualified for an ARC-Co wheat payment: Chelan, Island, Skagit, Snohomish and Whatcom. The official 2018 yield figures for Eastern Washington from fsa.usda.gov are shown at right.

Gerri Richter, program specialist at the Washington State FSA office, said it was unusual not to have a single Eastern Washington county get an ARC-Co payment. The data used by FSA to calculate program payments for 2018 came primarily from National Agricultural Statistics Service (NASS) surveys. In previous years, the wheat yield has been calculated using primarily winter wheat. According to Richter, that appears to be the case as well for 2018 for many counties.

In the past, growers have complained that the data provided by NASS, which relies on growers voluntarily completing surveys, is incomplete. Under the 2018 Farm Bill, FSA will use Risk Management Agency (RMA) data first, rather than NASS, a change Richter thinks will be especially beneficial to Eastern Washington growers because nearly all the wheat grown here is insured.

“I’m looking forward to RMA data being used,” she said. “We did get more yields from RMA for 2013-2017 for our 2018 Farm Bill, which is wonderful, because it gave the state committee a lot less yields to have to try to find info for.”

Wheat producers who elected the Price Loss Coverage (PLC) got some better news for their 2018 crop. The final rate for wheat is $.34/bushel, while barley is at $.33/bushel.

Producers who have questions about their 2018 crops and the ARC-Co or PLC programs should contact their county office. More information can also be found here. 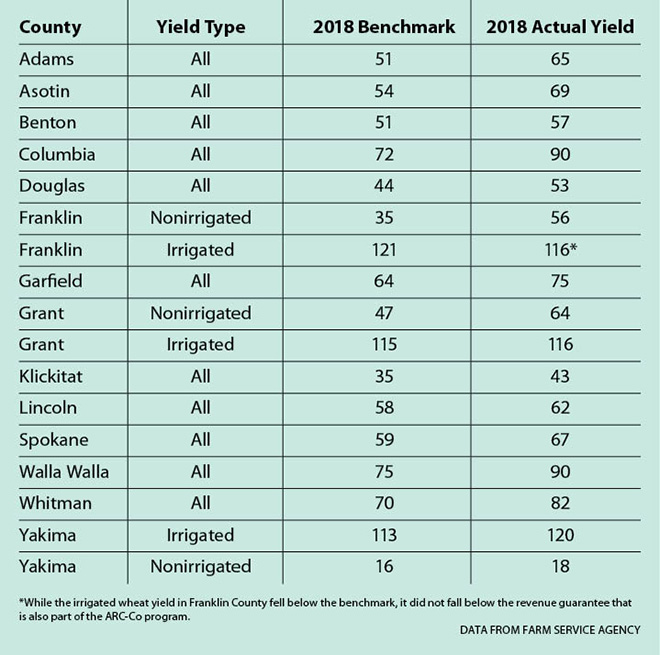