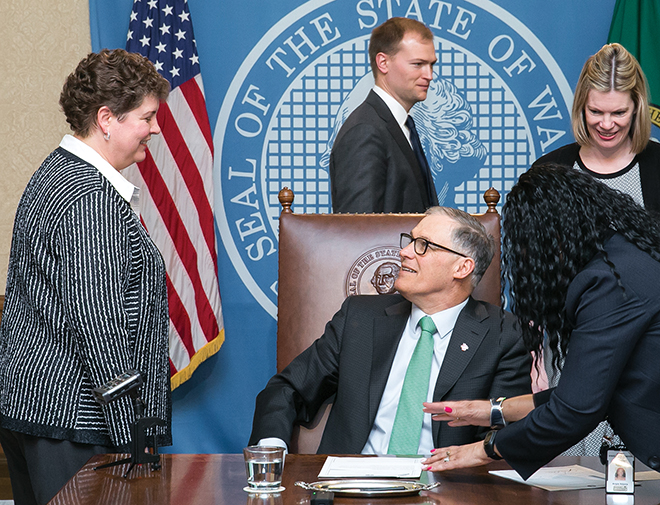 In mid-April, legislation prompted by a dispute between dryland wheat farmers and the Washington State Department of Natural Resources (DNR) was signed into law by Gov. Jay Inslee. SSB 5051 requires DNR to provide at least 180 days notice before terminating an agriculture or grazing lease. DNR must also provide documentation that the state has a plan to sell, exchange or increase the land’s profitability.

Last summer, DNR unexpectedly terminated several Benton County leases on very short notice in preparation for a planned irrigation project. Most of the leases still had multiple years left on them. Under current contracts, DNR is only required to give 60 days notice. Although DNR was the body responsible for the termination of the leases, no compensation was provided to the farmers until the matter was brought to the attention of local and state elected officials, especially Senators Sharon Brown and Judy Warnick, both members of the state Senate’s Agriculture, Water and Rural Economic Development Committee. WAWG’s leadership team worked with the growers and legislators to find a solution to the issue, writing letters of support and testifying in front of the Senate ag committee.

“The way DNR handled this matter created some hard feelings in the wheat industry,” said Nicole Berg, chair of WAWG’s Natural Resources Committee. “By requiring DNR to give at least 180 days notice before terminating a lease early, this bill will hopefully give growers time to harvest the crops they’ve planted on that ground, as well as time to make seeding and equipment-purchase adjustments in their management plans.”

To read more about this issue, download the November 2016 issue of Wheat Life here.