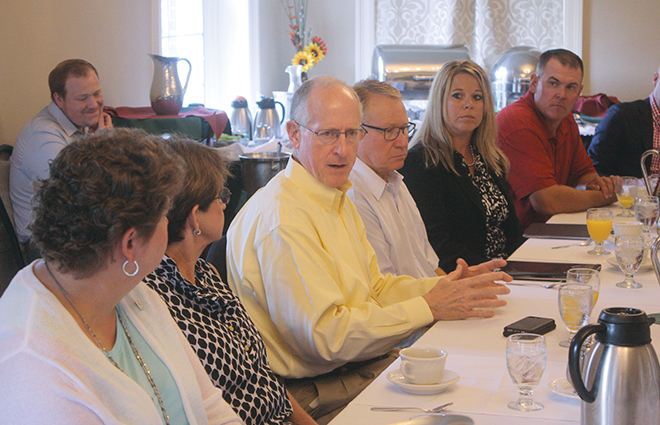 Representing the Washington Association of Wheat Growers (WAWG) at the breakfast were Marci Green, WAWG president, and Michelle Hennings, WAWG’s executive director. Wheat growers Randy Suess and Bruce Nelson attended, as did Mary Sullivan-Palmer and Joe Bippert, both from the Washington Grain Commission.

“We are very appreciative that Chairman Conaway travelled out to Eastern Washington to hear producers’ concerns around the farm bill,” Hennings said. “We are all working to ensure that the farm bill provides a strong support system for our farmers.”

From Spokane, Conaway traveled to Farmington, Wash., to see a rural broadband experiment program on Bruce and Andrew Nelson’s farm before heading to Pullman to visit Washington State University.

The breakfast started off with Conaway giving attendees an overview of farm bill progress, telling them that the farm bill is in a “great spot right now” as both the House and Senate are at work combining their separate versions of the bill. He singled out SNAP as one of the biggest issues the two chambers will have to deal with. In the House version, SNAP benefits are tied to work requirements for some recipients. House Democrats uniformly rejected the bill over the work requirements, and it passed strictly on a party-line vote. If the work requirements are included in the final version of the farm bill, there is some concern that it wouldn’t pass the Senate, which will need the backing of some Democrats. The Senate version made only minor changes to the SNAP program.

In the conservation title, changes include lowering rental rates in order to increase the amount of Conservation Reserve Program (CRP) acres available. Conaway also wants to end the Conservation Stewardship Program and roll those funds into the Environmental Quality Incentives Program. In trade, although the overall funding wasn’t increased, several market access programs were combined in order to get permanent baseline funding. Conaway said no major changes were planned for crop insurance.

“I am beyond compelled to get this thing done on time,” he said, adding that in recent years, no Congress has been able to pass a farm bill on time. The current farm bill expires in September.

Rural broadband was another topic the group discussed, with Conaway calling it the “single biggest unmet need in rural America.” He is working with other legislators, including McMorris Rodgers, to set standards for speed and delivery.

Trade was foremost on stakeholders’ minds, as several people asked Conaway what is happening with the Trans-Pacific Partnership (TPP) and the North American Free Trade Agreement (NAFTA) negotiations. Conaway reiterated President Trump’s preference for bi-lateral trade agreements and said the administration understands how important maintaining market access to TPP countries like Japan are to the Pacific Northwest wheat industry. Conaway also touched on the issues with China, including retaliatory tariffs. He said that each administration decides how they want to address World Trade Organization issues, and previous administrations believed that if the U.S. lived up to their obligations, other countries will also, but that China cheated.

“They don’t have the same fidelity to law that the U.S. has,” he explained. “You have to stand up to a bully, and sometimes he punches back. That’s China. This is the right fight to have.”

“Our wheat farmers are looking for assurances that Congress is addressing issues that threaten to undermine the U.S. food production system,” Green said. “We are all concerned about the Chinese tariffs and our access to overseas markets. We need to continue funding agricultural research, and we need to make sure that crop insurance remains a viable option for all producers. Passing a farm bill in a timely manner is critical to the health and well-being of farmers.”