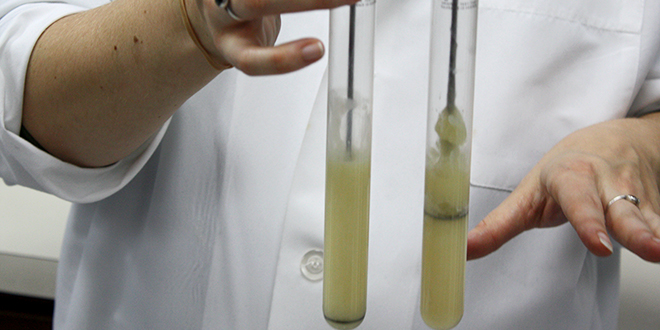 The Hagberg-Perten Falling Number Test measures the amount of time it takes for a stopper to plunge through a slurry of flour and boiling water. The shorter the time, the more falling number damage the wheat has.

“It was an informative meeting with many different aspects of the falling number problem discussed,” said WAWG Executive Director Michelle Hennings. Besides Hennings, Marci Green, WAWG secretary/treasurer, and Larry Cochran, WAWG past president, also attended the meeting. “Wheat farmers are already battling against low wheat prices, so for some farmers, having discounted wheat from low falling numbers could be the last straw.”

According to Don Potts, regional manager of the Washington State Department of Agriculture’s (WSDA) grain inspection program, between 30 and 40 percent of this year’s soft white wheat crop has a falling number below 300. Many of Eastern Washington’s overseas wheat buyers specify a falling number of at least 300. Wheat that tests below 300 is usually discounted because it results in inferior end-use products, such as cakes and breads. The Hagberg-Perten Falling Number Test is the mostly widely accepted test that measures starch damage caused by amylase enzyme activity brought on by too much moisture at harvest and Late Maturity Alpha Amylase (LMA) activity caused by extreme temperature swings during the growing season. It appears that LMA is the primary cause of this year’s low falling numbers.

During the meeting, the Farm Service Agency’s (FSA) disaster assistance program and the Risk Management Agency’s (RMA) falling numbers coverage were discussed. However, Judy Olson, FSA state executive director, explained that there is no money available in that pot. She suggested the Marketing Assistance loan program as a possible option. For wheat farmers that grow other crops, RMA’s Whole Farm Revenue program might help in the future.

Officials from WSDA talked about the Hagberg-Perten test and acknowledged that it can return inconsistent results if not performed correctly. Ryan Higganbotham, a regional extension specialist who manages the Washington State University’s cereal variety testing program, discussed falling numbers research.

Hennings talked about the feedback she has been getting from farmers. Many of them, she explained, are concerned that RMA is factoring in the falling number discount when calculating a farmer’s 10-year actual production history average.

“WAWG will be working with our national organization to lobby for more falling numbers research money as well as ways to improve the Hagberg-Perten test or to develop a new, more reliable test,” she said. “We will also work with RMA to address their policy of using falling number discounts in a farmer’s production history.”

At the end of the meeting, McMorris Rodgers thanked the group for their input, saying she would be taking away the following points:

For farmers who want more information about falling numbers, the topic is on the agenda at next week’s WAWG board meeting on Sept. 13, and the topic will be addressed in sessions at the 2016 Tri-State Grain Growers Convention in November. Please call the WAWG office at (509) 659-0610 for more information.