The falling number (FN) test is one of the measurements of preharvest sprouting. As previously mentioned, the FN test was developed in the 1960s and accepted worldwide since the 1980s. Major buyers have been using the test since mid-1990s, after concerns were raised with inferior quality wheat. 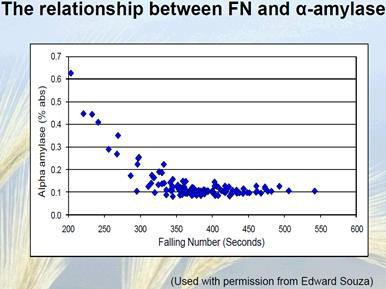 This chart, prepared by Meera Kweon, USDA-ARS, shows the relationship between the FN and alpha amylase activity. They become much more correlated as falling number drops below 300, ultimately impacting the quality of the end-product.

As described by Steven Wirsching of U.S. Wheat Associates, almost all of the wheat buyers have a FN specification. The test comes from the buyers not the grain traders. Specifically, the Japanese started using a FN specification of 300 seconds in 1994, as an improvement over the “then standard” visual sprout damage pick by FGIS graders. Wirsching  explained that moving from a subjective visual pick to a more objective mechanical measurement in falling number helped the Japanese find the wheat that best satisfied their end-product quality demands.

In an effort to assist the marketing of lower FN wheat, the Washington Grain Commission initiated analysis at the Western Wheat Quality Lab in Pullman to identify varying end-use impacts from differing levels of FNs from this year’s crop—information for some of our overseas buyers. While most of them have little flexibility with the 300 specification, others may be able to adjust if needed.

Testing standards are also important, and growers are encouraged to obtain official test results. Don Potts, Eastern Washington Region Manager for WSDA’s Grain Inspection Program (the FGIS designated/delegated agency in Washington), discussed FN testing and processes to standardize, reduce human error and increase repeatability. He explained differences between retest and backup samples which could influence test results. He noted that retests must be requested within 3-days, otherwise it is an entirely different sample that is being tested. He also notes that WSDA is required to follow precise, FGIS-designated procedures such as performing duplicate tests at the same time and averaging the results as part of providing official results. To read Don’s message on sample integrity, click here.

The video demonstrating the testing process can be accessed here.