NAWG vice president appointed to FCIC board of directors 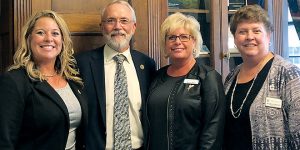 Nicole Berg (second from right), NAWG vice president and a Benton County farmer, has been appointed to the Federal Crop Insurance Corporation board of directors.

The National Association of Wheat Growers (NAWG) is announcing that its Vice President, Nicole Berg, has been appointed to the Federal Crop Insurance Corporation (FCIC) Board of Directors.

“NAWG is excited to announce that FCIC has accepted its nomination of NAWG Vice President Nicole Berg to its Board,” said NAWG President and Cass City, Mich., wheat grower Dave Milligan. “Berg’s background as a producer and knowledge gained from her experience as part of NAWG’s leadership make her an invaluable addition to the FCIC Board of Directors. Further, NAWG is pleased that Nicole will be part of such an important panel that is instrumental in helping to shape crop insurance policy. This announcement is good news for farmers across the country.”

The Federal Crop Insurance Corporation (FCIC) is a wholly owned government corporation that administers the Federal crop insurance program. It promotes the economic stability of agriculture through a sound system of crop insurance and providing the means for the research and experience helpful in devising and establishing such insurance. Management is vested in a Board of Directors, subject to the general supervision of the Secretary of Agriculture. Learn more here: https://www.rma.usda.gov/Federal-Crop-Insurance-Corporation.