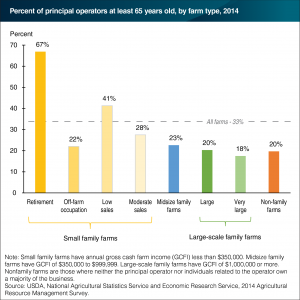 A notable characteristic of principal farm operators—the person most responsible for running the farm—is their relatively advanced age. In 2014, 33 percent of principal farm operators were at least 65 years old. This is nearly three times the U.S. average (12 percent) for older self-employed workers in nonagricultural businesses, according to the U.S. Bureau of Labor Statistics. Most older principal farm operators run small family farms. Retirement farms had the highest percentage of older operators (67 percent), followed by low-sales farms (41 percent) and moderate sales farms (28 percent). Older operators made up about one-fifth of each of the remaining groups. The advanced age of farm operators is understandable. The farm is also home for most farmers and they can gradually phase out of farming. Improved health and advances in farm equipment also allow operators to farm later in life than in past generations. This chart appears in the 2015 ERS report America’s Diverse Family Farms.