Stripe rust in PNW could be severe

Stripe rust will be likely severe in the eastern Pacific Northwest

Based on the forecast models using the temperature data from November 2016 to February 2017, stripe rust will potentially cause yield loss of 32 percent on highly susceptible varieties. This number is much higher than the 6 percent forecasted in January based only on the November-December weather conditions. The number is an average of the prediction range from 9 percent to 41 percent using six models. The models do not take snow cover into account. Although there were several periods of temperature below the point (5oF) under which the stripe rust fungus could not survive, most areas were covered with snow, which helped pathogen survival. Based on field observations, stripe rust fungus has survived the cold winter. Considering these factors, our current prediction is in the severe range between 40 percent and 60 percent yield loss on highly susceptible varieties, and the most “susceptible” commercially grown varieties, such as Xerpha and Eltan, will likely to have up to 30 percent yield loss. 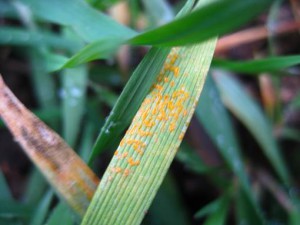 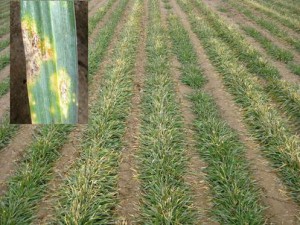 Stripe rust pustules found in a winter wheat field near Odessa in Lincoln County on March 8, 2017, indicating that the stripe rust fungus has survived the winter.

Different from the last year, spring is coming slowly. Much of the northern part of Washington is still under snow, and Wednesday, about 3 to 6 inches of snow fell in the Palouse region. On Wednesday, we were checking wheat fields in Whitman, Lincoln, Adams and Walla Walla counties in Washington. Stripe rust infection that occurred before the winter was recognizable (as dead spots) in many fields in Lincoln and Adams counties, indicating widespread and severe infection last fall as reported in last November. Most fields in Lincoln County were under snow cover. The lower leaves of big plants in early planted fields in Lincoln and Adams counties were dead and some fields had severe winter injury. Most stripe rust fungus in leaves from infection last fall should be dead, but some should have been survived. We were able to found stripe rust pustules in a field just south of Odessa along Highway 21 in Lincoln County, showing pathogen survival. Please keep in mind that even one pustule of stripe rust in a field grown with a susceptible cultivar in the early spring can cause epidemic in the growing season if later weather conditions are favorable to the disease.

In Adams and Walla Walla counties, wheat has turned fresh green and started growing. There were no or very little winter injury. We found active stripe rust pustules (producing spores) in a commercial field and also in our experimental field near Walla Walla. This early appearance of stripe rust is similar to the situation last year.

Recommendations for the Pacific Northwest

As stripe rust has been found in Washington and is predicted to be severe, control of stripe rust is necessary. Some general recommendations for the eastern Pacific Northwest, similar to the recommendations made at this time last year, are the following:

2) For spring wheat, consider planting resistant varieties. Use the Seed Buyers Guide to choose varieties rated 1 to 4 for stripe rust and avoid those rated 5-9 if possible.

3) As there has been plenty of moisture, which will last long into the late spring and early summer, the weather conditions will be favorable for stripe rust development. A second application may be needed around the flag leaf stage, depending upon the first time of fungicide application, rust re-development in the field, variety with high-level of high-temperature adult-plant resistance or not and weather conditions. General recommendation for using a second application or not will be made later as the season progresses and rust develops.

This year, stripe rust has been reported so far in Texas, Louisiana, Mississippi, Arkansas, North Carolina and Washington. Stripe rust was first reported in Texas on Feb. 9, not much later than the last year in January. The rust seems to be not as widespread as this time last year. However, stripe rust was widespread in wheat nurseries in northern Louisiana by late February. Last week and this week, we received stripe rust samples from Mississippi and Arkansas, respectively. On March 2, stripe rust was reported in North Carolina. Based on past experience, if stripe rust is found in Texas and Louisiana before March, the disease will likely develop into a severe and widespread epidemic throughout the Great Plains and further into the east regions except when drought conditions occur. Application of fungicides is recommended for fields grown with susceptible varieties. Fungicide timing needs to be based on local recommendations.

Collecting. When collecting stripe rust samples, pick 1 to 5 leaves with uredinial pustules for each sample from a single commercial field or a single variety or line in a breeding/disease nursery. Samples collected in the early season are more preferred than in a late season. Avoid leaves with leaf rust and powdery mildew if possible. Leaves with a single stripe or a patch are preferred over leaves covered with rust. It is better to collect when leaves do not have water. If leaves are wet, pick the leaves, leave open for few minutes to get rid of water, and then place them into a glassine envelope (envelopes used to cover heads when make crosses) or a paper bag. Please do not use plastic bags to keep leaf samples as plastic bags seal in moisture and may rot leaves. Please do not pull roots with soil and mix with leaves. Do not send whole plants as only leaves are necessary. If leaves do not have rust but heads have, one or two heads can be collected. For a field grown with an important variety, up to three samples can be collected from different spots. For a nursery field, up to five samples from different varieties/lines can be collected. We also welcome stripe rust samples from various grasses. Please record the following information as much as possible: 1) state, county, and nearest city/town; 2) date; 3) plant (wheat, barley, common and/or grass species); 4) (if crop) growth stage; 5) infection type; severity; and prevalence (incident); 6) commercial field or nursery; 7) collector’s name (print); and 8) other notes such as “the variety was resistant in the past,” etc. Keep sample bags loose and do not tighten sample bags

Keeping samples before shipping. The stripe rust fungus does not like hot and humid conditions. After collection, keep samples in a cooler if possible. If no cooler, keep samples under shaded conditions (e.g. underneath car seats), avoiding sunshine and heat. In a hot day, roll down windows to reduce temperature or take samples out of the vehicle.

Please send samples as soon as possible. If you need to wait for a couple of days, keep samples at 40F in a refrigerator, but not too long before shipping. Do not keep fresh leaf samples in any type of freezer.

Shipping samples. For important samples, it is preferred to send them through express mail. For regular samples, regular mail should be fine if samples are collected and kept under the above mentioned conditions. Under such conditions, we should be able to recover them if received within 10 days after collection. Also, do not use plastic bags to keep samples for shipping.

If you have any questions regarding stripe rust samples, contact Xianming Chen at (509) 335-8086 or by email at xianming@wsu.edu or xianming.chen@ars.usda.gov.