Leadership and staff of the Washington Association of Wheat Growers (WAWG) recently traveled to Washington, D.C., to meet with various federal agencies as they make the transition to a new administration.

“There are a lot of changes happening in Washington, D.C., as the new administration prepares to take over,” said Michelle Hennings, executive director of WAWG. “We wanted to meet with the various agency transition teams to make sure the wheat industry’s voice is still being heard and that our concerns haven’t been lost in the shuffle.” 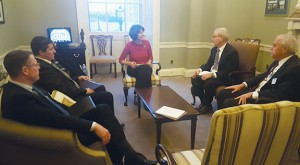 Members of the Washington group were able to sit down with Rep. Cathy McMorris Rodgers (R-Wash.) to talk about the wheat industry’s national priorities.

Joining WAWG on the trip were Derek Sandison, director of the Washington Department of Agriculture (WSDA), and Jason Ferrante, WSDA assistant director. Glen Squires and Dana Herron, both from the Washington Grain Commission, and representatives of the Oregon and Idaho wheat grower organizations also made the trip. The group was able to meet with staff from several U.S. Department of Agriculture’s (USDA)departments, including the Natural Resources Conservation Service, the Farm Service Agency, the Risk Management Agency and the Agricultural Research Service (ARS). 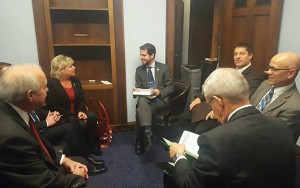 Low falling numbers and how those quality discounts can affect a producer’s yield is still a topic of concern to many Pacific Northwest Wheat Growers, and the group was able to discuss those concerns with two of agriculture’s top congressional members’ staff: Sen. Pat Roberts (R-Kan.), chair of the Senate’s ag committee, and Sen. Heidi Heitkamp (D-N.D.), also a member of the Senate’s ag committee. Hennings said the visits set the groundwork for a possible national coalition of commodities that all have similar issues with quality discounts impacting crop insurance yields.

“We are still working on a solution for farmers with the Risk Management Agency,” Hennings said.

Another Pacific Northwest effort involving falling numbers is being led by the WSDA’s Sandison, who scheduled meetings with the agencies involved in grain inspection, including FGIS (the Federal Grain Inspection Service) and ARS, to discuss research funding for improving or replacing the current falling number test. In a statement to Wheat Life, Sandison said the WSDA has been working with federal partners to address the issue,  making sure that the appropriate USDA agencies are aware of the challenges the situation has created for the state’s wheat industry.

“One area we have been focusing on is technology,” he said in the statement. “The test WSDA currently uses was first designed in the 1960s, and I believe newer technology would go a long way toward mitigating the current problem, specifically by allowing better segregation of low falling number wheat from high falling number wheat. The discussions went well, and it was extremely helpful to have the wheat industry join me in these meetings.”

Washington’s delegation was also able to spend time with the staffs of both of Washington state’s senators, Patty Murray and Maria Cantwell, not to mention the offices of Rep. Dave Reichert, Rep. Dan Newhouse, Rep. Cathy McMorris Rodgers and Rep. Rick Larsen.

WAWG’s leadership usually travels to Washington, D.C., at the end of January to meet with the state’s federal delegation and many of the above-mentioned agencies. According to Hennings, because Congress was in recess during this last trip, the staffers had more time to spend with the wheat group.

“We were able to sit down and spend a significant amount of time with the different offices and agencies to discuss where the wheat industry is and what our needs are,” she explained. “I felt our visit was very well received and very productive.”

• Supporting the approval and expansion of trade agreements that provide new market access for wheat;

• Supporting an increase in funding for the Market Access Program and the Foreign Market Development program;

• Removal of sequestration from farm program payments; and