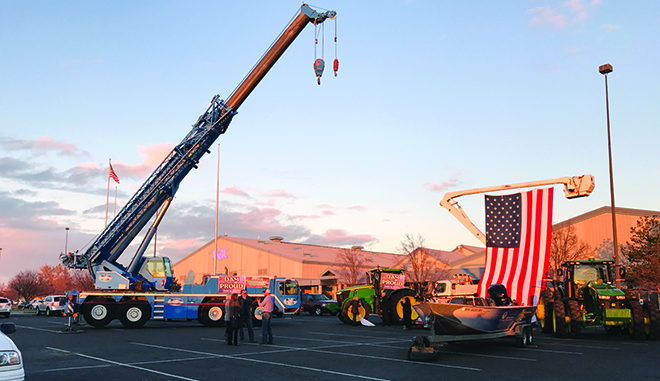 This week’s scoping meeting held by the Corps of Engineers on the Columbia River operating system in the Tri-Cities brought out a show of support for Snake River dams. Photo by Nicole Berg

With recent scoping meetings on the Columbia River operating systems, Washington Association of Wheat (WAWG) growers have shown their support by submitting letters to the editor to various newspapers. The following was submitted by Bob Walli, Adams County wheat grower and WAWG board member.

With the renewed interest in the Columbia River Operating System, this is a great opportunity to remind the public that the dams on the Snake River are state-of-the-art facilities allowing salmon, clean energy and cargo transportation to coexist.

The Columbia River is one of the largest export gateways in the U.S., largely thanks to the Snake. Ten million tons of commercial cargo and nearly 67 million bushels of wheat are transported on the Columbia-Snake River System annually, alleviating the burden on our road and rail infrastructure. The river barge system provides the most cost-efficient mode of transportation, allowing us to compete in overseas markets. With the wheat industry’s economic impact of $550 million, clean, efficient and reliable transportation is vital. The dams also produce enough clean hydropower energy to power nearly 2 million homes. And contrary to popular belief, record-breaking salmon return numbers have been documented past all 8 dams on the Columbia/Snake River system.

And a related article from the Capital Press.