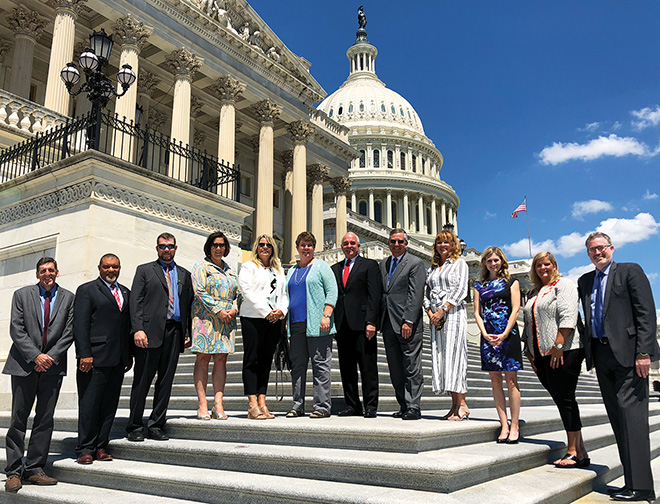 Washington Association of Wheat Growers’ (WAWG) President Marci Green and WAWG Executive Director Michelle Hennings were in Washington, D.C., last month to take part in the WSU/WSDA Taste of Washington D.C. Trip, which showcased the Evergreen State’s agricultural industry to Congress. As part of the trip, Hennings and Green were also able to lobby policymakers during a critical time in the 2018 Farm Bill process as both the House and Senate were getting ready to send the bill to conference. 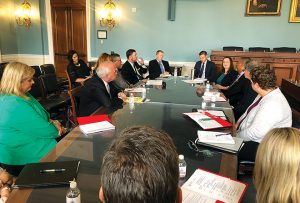 The group met with staff of the House Agriculture Committee.

Other participants in the trip included representatives from the potato, wine, tree fruit and dairy industries.

One of the highlights of the trip was a reception that included some of the foods produced in Washington state, including cookies with WAWG’s logo on them, cherries, wine, bread from the Washington State University (WSU) Bread Lab, hummus and whiskey. During the event, WSU officials such as President Kirk Schulz and André Wright, dean of the College of Agricultural, Human and Natural Resource Sciences, and Derek Sandison, director of the Washington State Department of Agriculture (WSDA), talked about the importance of trade to Washington state’s economy and the partnership between WSU, WSDA and agricultural stakeholders. 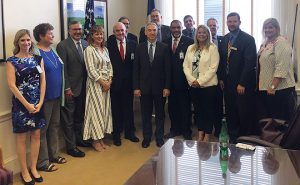 The group had a productive meeting with USDA Deputy Secretary Stephen Censky (center with blue tie) where they discussed the importance of the Conservation Stewardship Program to Washington producers.

“This was the first time this event has been held, and it was very successful,” said Hennings. “We were able to spend time with many members of our congressional delegation advocating for our industry and talking about the impacts of the trade tariffs. While WAWG has been very successful in past trips to D.C., it is extremely effective coming into high-level meetings as a coalition of Washington state agriculture. We presented a united, solid partnership that got officials’ attention.”

The group was able to meet with Washington delegation members including Rep. Cathy McMorris Rodgers; Rep. Dave Reichert; Sen. Patty Murray; Rep. Dan Newhouse; and Rep. Rick Larsen. They also met with Sen. Pat Roberts (R-Kan.); staff of the House Agriculture Committee; the Office of Management and Budget; U.S. Department of Agriculture; and White House staffer Mackenzie Gross. Mary Palmer Sullivan, vice president of the Washington Grain Commission (WGC), also participated in the trip and talked about research and the partnership between the WGC, WSU and U.S. Department of Agriculture’s (USDA) Agricultural Research Service (ARS). She also encouraged policymakers’ support for construction of the USDA ARS Biosciences Building on the WSU campus. The building is ranked in the top 10 among proposed projects for USDA construction funding.

Besides trade, tariffs and the farm bill, Hennings and Green talked about the importance of crop insurance, market development funding and possible trade mitigation actions USDA might take. In regards to those mitigation plans USDA Ag Secretary Sonny Perdue has alluded to (see page 22), Hennings said in several meetings she told lawmakers that farmers would prefer “…trade not aid.” 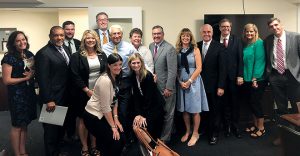 Washington Rep. Dave Reichert (sixth from left) has been a stalwart defender of trade while serving in Congress. He will not be running for re-election after his current term ends.

“With wheat harvest in full swing and farmers’ concerns around possible impacts of the tariffs on our markets, we wanted to impress on Congress how important trade is to our state and how easily these tariffs could irreparably damage our markets,” Green said.

In one of the USDA meetings with Deputy Secretary of Agriculture Stephen Censky, the group was able to discuss conservation, specifically how important the Conservation Stewardship Program (CSP) is in Washington state. The House version of the 2018 Farm Bill eliminates CSP and moves some of those funds to the Environmental Quality Incentives Program. The Senate’s version of the farm bill leaves CSP untouched.

“I want to thank WSU and WSDA for organizing this trip and the Taste of Washington reception. They did an amazing job showcasing the importance of agriculture to our state,” Hennings said.