White wheat not eligible for latest round of COVID-19 aid

Today, growers in Eastern Washington learned many of them would not be eligible for the latest round of aid from the U.S. Department of Agriculture (USDA).

Soft red winter, hard red winter and white wheat have been deemed not eligible for the Coronovirus Food Assistance Program (CFAP), which sets aside $16 billion for direct payments to farmers and ranchers under authority of the Coronavirus Aid, Relief and Economic Security (CARES) Act that was signed on March 27. Under USDA’s rules, commodities had to experience a 5 percent or greater price decline during two, five-day periods from mid-January to mid-April. Durum wheat and hard red spring wheat are eligible. The Farm Service Agency will begin taking applications for CFAP on May 26.

About 80 percent of the wheat grown in Eastern Washington is soft white wheat. The other 20 percent is mostly hard red winter and hard red spring.

“We appreciate USDA communicating the importance of U.S. food production for our national security. CFAP will allow critical assistance to farmers leading into harvest seasons across the nation,” said Ryan Poe, WAWG president and a farmer from Hartline, Wash. “However, all classes of wheat have experienced price drops during the first quarter of 2020—a critical marketing time for wheat producers. So while cash prices were less than futures prices during the designated time frame, many wheat growers were greatly impacted but do not qualify for CFAP. Producers of all classes of wheat should be eligible for assistance under CFAP. Like many other commodities, wheat growers have been battling low prices all year, and COVID-19 has introduced another level of instability into our markets.” 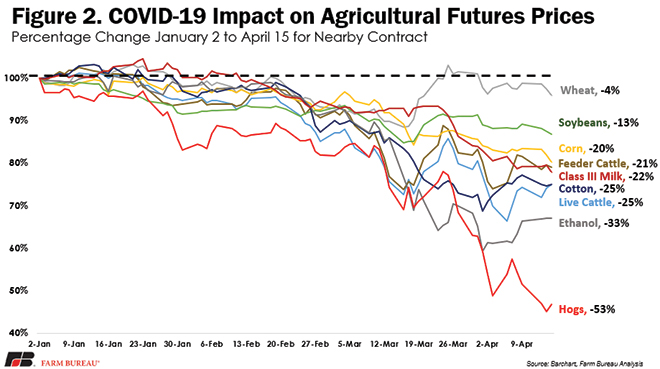 This chart from the American Farm Bureau Federation shows the price decline in various U.S. commodities from January to April. Unfortunately, while wheat as a whole showed price volatility during this period, it recovered enough at the end of the considered time frame to be above the 5 percent price decline cutoff. This chart appeared on the American Farm Bureau Federation’s website.

Another issue with soft white wheat is that the rule doesn’t specify what price series was used by USDA to determine the price drop. The rule only says that cash prices would be used for commodities where there isn’t a futures market.

Michelle Hennings, WAWG’s executive director, said the National Association of Wheat Growers (NAWG) has been working hard to show USDA the impact COVID-19 has had on all classes of wheat. In April, NAWG sent a letter to Agriculture Secretary Sonny Perdue urging him to include price volatility during the April to January time frame in order to capture the full market conditions during which wheat farmers were marketing their wheat. The letter included charts demonstrating how the May contract on all three exchanges saw substantial price drops and partial recoveries during that period.

“Each of these futures contracts experienced a more than 10 percent price decline during the designated time period, and farmers marketing 2019 production during this time frame should be eligible for assistance as they were impacted by the price volatility. While wheat futures prices partially rebounded in mid-March due to a short-term increase in demand for grocery staples such as flour, bread and other wheat food products, this rebound wasn’t necessarily translated into higher prices that farmers received,” the letter said.

A chart showing the soft white Portland price from January to April demonstrates the volatility of the soft white market. The market swung more than 8.5 percent from its highest price of $6.33 on Jan. 28 to its lowest point on March 16 of $5.79. 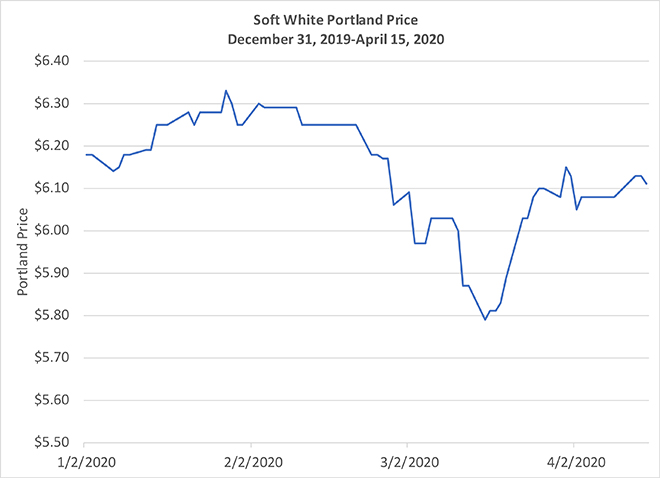 “The information we have is that USDA may reconsider eligibility for other commodities if evidence is provided that supports a 5 percent price decline,” Hennings said. “NAWG is continuing to press USDA to include eligibility for all classes of wheat for CFAP and to consider price volatility over that entire time frame as part of the equation. Farmers would have been selling wheat during that period, and those impacts should be addressed. NAWG has done a tremendous job keeping the wheat industry at the forefront of any discussions regarding aid to farmers and ranchers, and we appreciate the time and effort the organization has made to support our industry.”

CFAP payments will come from two funding sources: the CARES Act and the Commodity Credit Corporation (CCC). The payment rate for wheat is broken down as such:

Producers will be paid based on the inventory subject to price risk held as of Jan. 15, 2020. NAWG is working to find more details on how this is defined. A single payment will be made based on 50 percent of a producer’s 2019 total production or the 2019 inventory as of Jan. 15, 2020, whichever is smaller, multiplied by the commodity payment rate. Initially, producers will receive 80 percent of their maximum total payment upon approval of their application. The remaining portion of the payment (up to the payment limit) will be paid at a later date as funds remain available.

To be eligible, a person or legal entity must have an average adjusted gross income of less than $900,000 for tax years 2015, 2016 and 2017. If 75 percent of their AGI comes from farming, ranching or forestry, then the $900,000 limit doesn’t apply. There is also a hard cap on payments of $250,000 per person or legal entity—this limitation applies to the total amount of CFAP payments for all eligible commodities. There are also special payment limit rules for participants that are corporations, limited liability companies and limited partnerships (corporate entities).

For all commodities, USDA compared the average price from Jan. 13-17 with the average price from April 6-9. For hard red spring, they used the May contract on the Minneapolis Grain Exchange. For durum, that was calculated using 103.4 percent of the hard red spring wheat futures price, which is the multiplicative factor used under CEPP for Montana, North Dakota and South Dakota. NAWG is looking into what price series would’ve been used for white wheat.

More information can be found at farmers.gov. WAWG and NAWG are still reviewing specific details of the program and are identifying the next steps for engaging USDA.