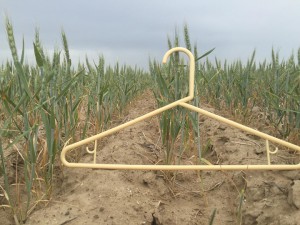 The Berg’s wheat crop in 2015 during a multiyear drought.

How many people can go multiple years without being paid for the work they do? For farmers, that situation is all too common, as a crop can be destroyed by hail, fire, drought, etc., ruining a year’s worth of work very quickly. The only way to survive is through crop insurance. Crop insurance is a vital part of producers’ financial plans, although most of them hope they never need to fall back on it. Benton County grower Nicole Berg sent in these photos that illustrate just how critical crop insurance was on their farm two years ago.

In 2015, parts of Benton County were in the third year of a four-year drought. The Berg’s dryland wheat crop was especially hard hit. Nicole used a clothes hanger to illustrate how the lack of water had severely stunted the wheat’s growth. The insurance company pulled the plug on the crop, which was subsequently mowed down. Fast forward to this year. Nicole took another hanger out to the same spot to illustrate what a healthy, dryland wheat crop should look like. Without crop insurance the Berg’s wouldn’t have been able to survive those four years of drought. Here’s Nicole’s thoughts:

“I think it is important for people to understand that a farmer doesn’t want to collect crop insurance but has to have it to stay in business. Nobody gets rich off of crop insurance. You just hope it is enough to repay your loans and cover your costs. 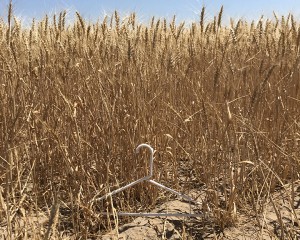 Berg’s 2017 wheat crop during a non drought year. This picture was taken at the same spot at about the same time of the year as the picture in 2015.

“When you purchase crop insurance, you only cover a percentage of your crop, and you decide how much to insure based on the cost of coverage, the cost of production, and how conditions at the time of the purchase of crop insurance look. For example, in our case, if we believe we have to have crop insurance, then we purchase it at the 85 percent level. If we think it is going to be an okay year, we may purchase coverage at 75 percent or 65 percent.

“During this drought, we ended up having to collect on crop insurance in 2013, 2014, 2015 and 2016, which goes to show how bad the drought really was. If we hadn’t had crop insurance, there’s no way our farm would have survived.”