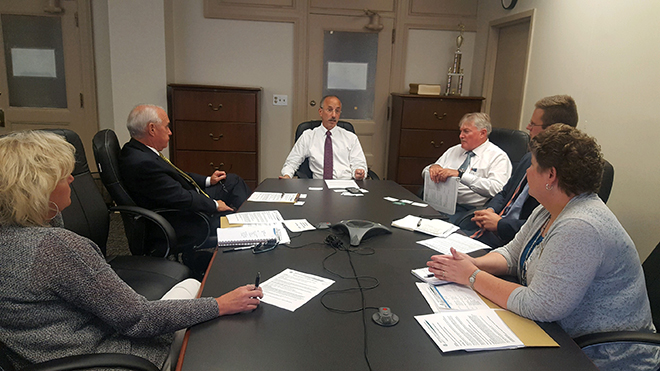 Leaders and staff of the Washington Association of Wheat Growers and the Washington State Department of Agriculture are in Washington, D.C., this week for a fly-in to discuss the effects of proposed budget cuts on Research, trade and crop insurance. They will be meeting Washington’s congressional delegation and with many USDA agencies, like this meeting at the Farm Service Agency.

Officers and staff of the Washington Association of Wheat Growers (WAWG) are in Washington, D.C., to talk to legislators about the possible impacts of proposed federal budget cuts in three areas critical to Washington wheat farmers: research, trade, and crop insurance.

“This trip is focused on demonstrating to legislators how the Trump Administration’s proposed budget cuts in research, trade and crop insurance will directly impact our growers,” said Michelle Hennings, WAWG’s executive director. “Our members have spoken loudly and clearly that budgetary cuts to these vital programs will not only jeopardize their bottom lines, but would also disrupt the safe, reliable and abundant food supply American consumers currently enjoy.”

Accompanying the group will be the Washington State Department of Agriculture Director, Derek Sandison. He said, “I am pleased to join the representatives of the Washington Association of Wheat Growers to D.C. and work with them to advance our requests for federal assistance in dealing with the falling numbers issue. I also look forward to meeting our congressional delegation and our federal partners for discussion on other significant issues facing Washington agriculture.”

Approximately 90 percent of Washington’s soft white wheat is exported overseas to markets developed and supported by the Market Access Program (MAP) and the Foreign Market Development (FMD) Program. The agriculture industry has been advocating for an increase in funds allocated to these programs; instead funding was eliminated in the proposed budget. Several studies have shown that the programs generate a net return of more than 25 to 1 for U.S. farmers. Growth in several of the Washington wheat industry’s most important developing markets in Asia and Latin America could be slowed without MAP and FMD funding.

After last year’s rash of low falling numbers cost Washington wheat farmers millions of dollars in discounts, the need for more research funding in this quality issue became clear. The Pacific Northwest wheat industry has asked for federal funding for research into genetic causes of low falling numbers as well as funding to develop a new, more reliable testing method. This funding will be channeled through Agriculture and Food Research Initiative grants and the U.S. Department of Agriculture’s Agricultural Research Service (ARS). The proposed budget would reduce ARS funding.

Crop insurance plays a vital role in most producers’ risk management plans. It is often the only thing that helps them recover after a catastrophic crop loss and should not be considered a handout. Producers must pay out of pocket premiums and meet strict eligibility guidelines in order to qualify for crop insurance. In addition, farmers typically must absorb a loss of 25 percent before crop insurance kicks in. In 2016, crop insurance protected almost 2 million Washington wheat acres for more than $540 million. Crop insurance gives producers a way to protect their livelihood and encourages them to continue farming when disaster strikes.