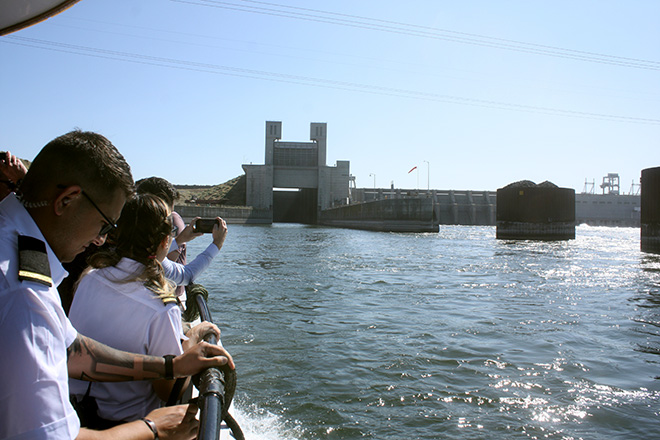 As the debate around breaching the lower Snake River dams continues, the Washington state agricultural industry brought more than 3 dozen state legislators and aides on a boat tour last week in an effort to demonstrate how important the dams are to the region’s economy.

Legislators boarded the boat at the Port of Kennewick. While headed upstream to Ice Harbor Dam, they heard an overview of the Snake River System from U.S. Army Corps of Engineers (USACE) representatives and saw a barge in the process of being loaded at Tri-Cities Grain.

The Washington Association of Wheat Growers (WAWG) was one of the sponsors of the tour. Barging is one of the most efficient and environmentally friendly methods for moving cargo. A typical four-barge tow moves the same amount of cargo as 140 rail cars or 538 trucks. The Columbia-Snake River System is the top wheat export gateway in the U.S. In 2014, nearly 10 percent of all U.S. wheat exports were barged through the Snake River dams. It would take at least 137,000 semitrucks or 23,900 railcars to transport that same amount of wheat. 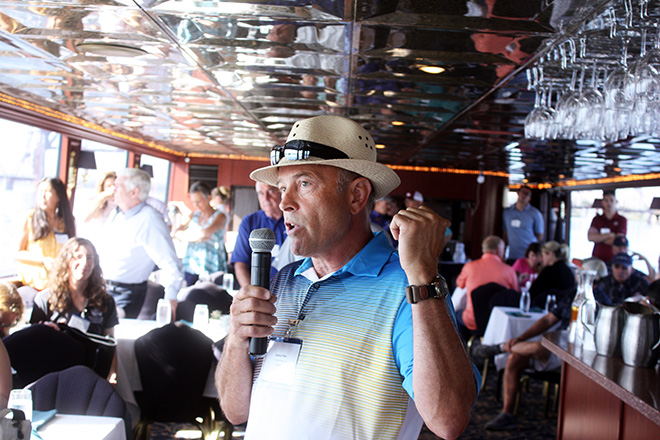 Damon Filan of Tri-Cities Grain talked about the importance of a navigable river system to the Inland Pacific Northwest. 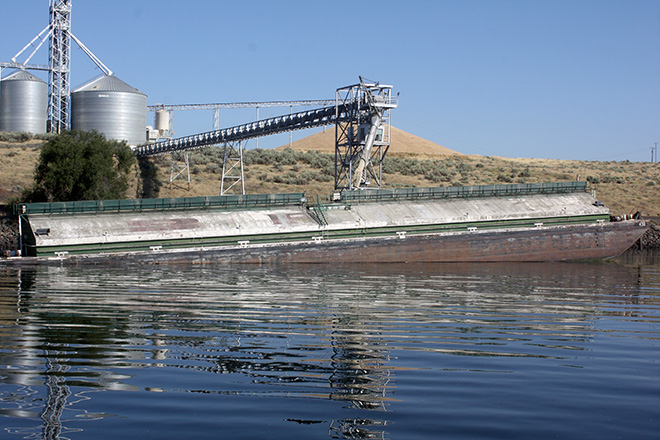 A barge being loaded with grain at Tri-Cities Grain. Did you know that one four-barge tow moves the same amount of cargo as 140 rail cars or 538 trucks?

Besides allowing for the movement of cargo up and down the river system, the Snake River dams are also an important part of Bonneville Power Administration’s (BPA) energy generation portfolio. Chris Allan, a BPA official, explained that the dams play an important role in providing back-up power during times of heavy usage.

Chad A. Rhynard, chief, Technical Support Branch, USACE’s Walla Walla District, added that each turbine at Ice Harbor Dan—there are six of them—is rated for approximately 100 megawatts compared to a standard wind turbine, which is rated at two megawatts. He said that the Snake River dams are rated as one of the top 10 hydropower groups in the U.S.

Laurie Weitkamp, a research fisheries biologist at the National Oceanic and Atmospheric Administration’s (NOAA) Northwest Fisheries Science Center, gave a presentation on West Coast salmon recovery and orca health. She explained that salmon populations are cyclical, with periods of high and low numbers. The bottom line, she said, is that many salmon populations are in a downward trend largely due to unfavorably warm ocean conditions. 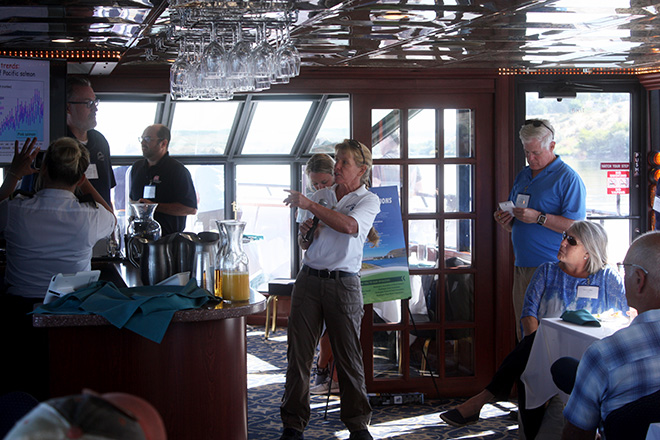 “The north Pacific has been very, very warm, and salmon are a cold water species. They don’t do very well in warm water,” she said, adding that other salmon populations besides the Columbia River are seeing low returns, even runs up in Canada.

As far as breaching the Snake River dams being the answer to orca recovery, Weitkamp said NOAA’s position is that breaching the dams is not seen as the solution. She added that the salmon from the Columbia River are a “drop in the bucket for what killer whales need,” and that it is the collective recovery of West Coast salmon that is important for the killer whales.

A 2016 statement from NOAA’s website, states, “…NOAA Fisheries assessed the operation of the four lower Snake River dams and their effects on listed salmon and steelhead in our Biological Opinion issued in 2008. In 2014, our supplemental Biological Opinion re-examined the issues, including consequences for Southern Resident killer whales. Neither opinion, nor the recovery plans NOAA Fisheries has developed for individual salmon species and stocks, concluded that breaching the dams is necessary for recovery of Snake River salmon or Southern Resident killer whales. The biological opinions concluded that hatchery production of salmon and steelhead in the Columbia and Snake systems more than offsets any losses of salmon from the killer whale prey base caused by the dams.”

Weitkamp ended her presentation by telling the group that when it comes to orca recovery, people need to consider the big picture, because “what happens in other places impacts us here.” As an example, she talked about how unfavorable ocean conditions in California have driven the sea lions north, where large numbers have been preying on salmon.

Once at Ice Harbor Dam, the group had the opportunity to go through the navigation lock and then see where the turbines are housed. They also got a brief overview of the fish ladders and the steps BPA is taking to help salmon move past the dam. 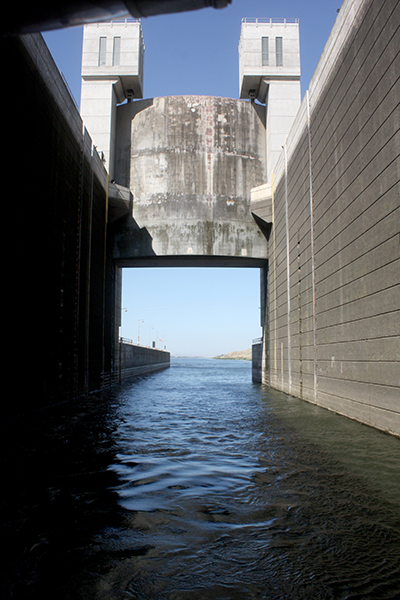 In the lock waiting for the gate to close. Ice Harbor Dam was authorized in 1945 and was operational by 1962. The locks provide 100″ of lift which is among the tallest in the world. 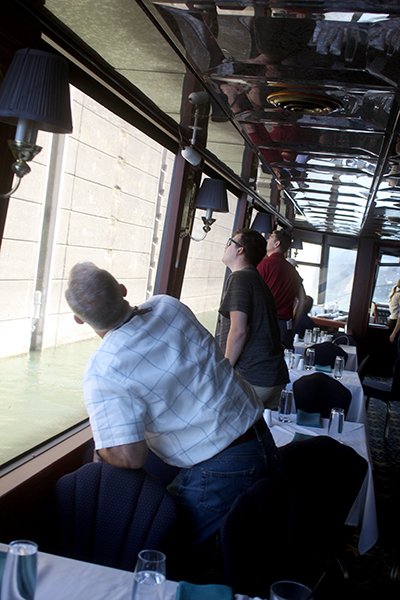 In the lock watching the top of the dam slowly creep closer. 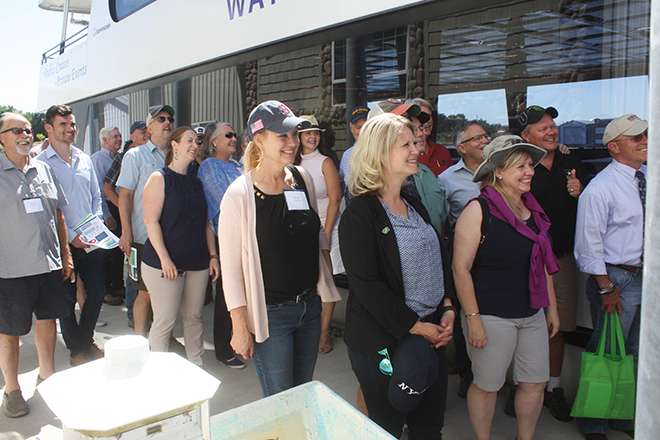 Some of the legislators that joined the ag stakeholders on the Ice Harbor Dam tour. 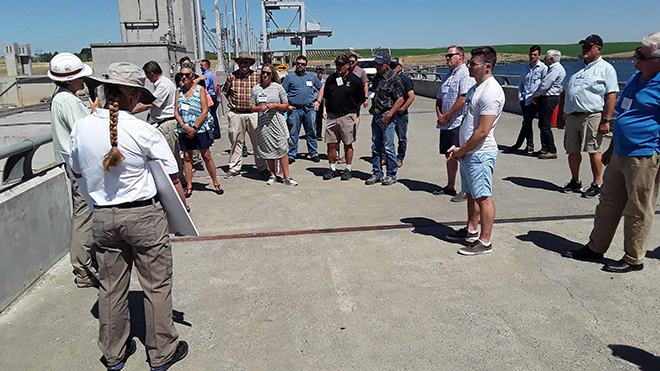 Part of the Ice Harbor Dam tour included a short presentation on what the Corps is doing to help fish bypass the dam. Photo courtesy of the U.S. Army Corps of Engineers.

Editor’s note: Due to security concerns, photos from inside Ice Harbor Dam were not permitted.