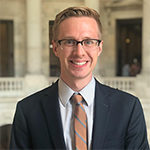 This week, National Association of Wheat Growers (NAWG) CEO, Chandler Goule, promoted Jake Westlin to senior director of policy and communications. Jake joined NAWG in October 2019 and has been a key part of NAWG’s policy team and has managed a host of projects during his tenure. Through Jake’s six years working with Capitol Hill and his work on two farm bills as part of Senator Heitkamp’s (D-N.D.) legislative team, he has brought a fundamental understanding of agricultural policy to NAWG. Additionally, from his time at Forbes Tate Partners as a research and policy analyst, Jake has an extensive background in agriculture and public lands, as well as food and nutrition policy. In Jake’s new role, he will oversee the policy and communications team and continue being a voice for wheat growers on the Hill.