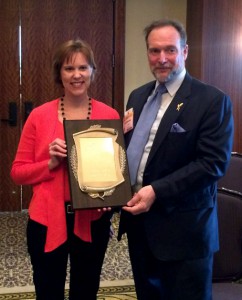 From the National Association of Wheat Growers

Last week, Darci Vetter was selected as the inaugural recipient of the National Association of Wheat Growers President’s Award. Vetter serves as Chief Agricultural Negotiator with the rank of Ambassador at the Office of the U.S. Trade Representative. NAWG President, Brett Blankenship, presented her the award during the Commodity Classic in New Orleans.

“Ambassador Vetter has been an instrumental voice for the wheat industry, and a champion for all of agriculture. We sincerely appreciate all the work she has done on behalf of wheat growers across the nation, particularly for her role in concluding the Trans-Pacific Partnership negotiations,” said Blankenship, “Because of her hard work, U.S. wheat farmers could have new market opportunities in places like Japan and Vietnam if Congress approves TPP. We are grateful for her efforts and for having such a champion of agriculture at USTR. I am proud to recognize Ambassador Vetter as the first ever President’s Award recipient.”

The President’s Award was designed to highlight individuals who work tirelessly on behalf of the agriculture industry. It is given to someone who expresses a passion for the wheat industry, based on the individual’s demonstration of commitment to the welfare and goals of America’s wheat farmers.