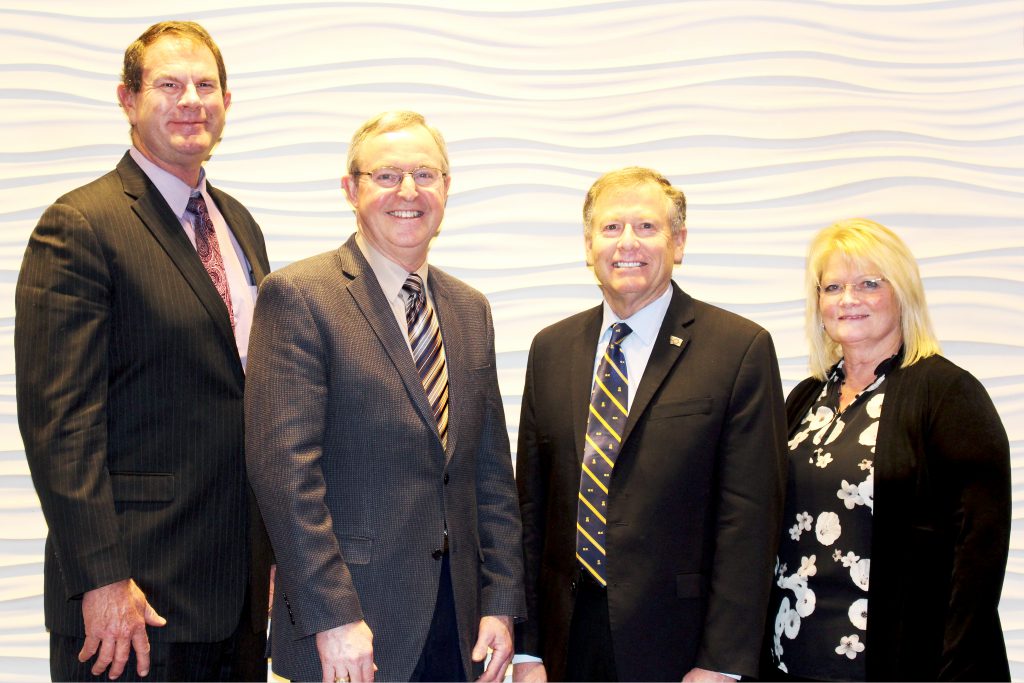 The U.S. Wheat Associates (USW) board of directors elected new officers for the 2019/20 (July to June) fiscal year at their meeting Feb. 15, 2019, in Washington, D.C. The board elected Rhonda K. Larson of East Grand Forks, Minn., as secretary-treasurer; Darren Padget of Grass Valley, Ore., as vice chairman; and Doug Goyings of Paulding, Ohio, as chairman. These farmers will begin their new leadership roles at the USW board meeting in June 2019 in Montana when current Chairman Chris Kolstad of Ledger, Mont., will become past chairman. USW is the export market development organization for the U.S. wheat industry.

Rhonda K. Larson was raised on her family’s Red River Valley farm and has been engaged in the operation full-time for nearly 30 years. Her father started the farm 50 years ago growing potatoes, wheat and barley. With her two brothers and her son, the third generation on the farm, they currently grow hard red spring wheat and sugarbeets.

Larson has been a board member of the Minnesota Wheat Research & Promotion Council for 16 years and served as chair from 2010 to 2012. She served on the Wheat Foods Council board and is a long-time member of the Minnesota Association of Wheat Growers and the Red River Valley Sugarbeet Growers Association. As a USW director, she served on the Long-Range Planning Committee and the Budget Committee.

“As farmers we need to make a profit and part of the way to do that is to make it a priority to improve wheat quality and continue to bring quality wheat to the world.,” Larson said. “I have always had an interest in being on the U.S. Wheat Associates officer team. My role on the farm has changed and I am now able to dedicate the time necessary to serve. I am humbled by the respect and encouragement I have received from wheat farmers in Minnesota and from the other U.S. Wheat directors and I will do my best to represent them well.”

Larson received a bachelor’s degree in public administration and a juris doctor degree in law from the University of North Dakota. Along with farming, she enjoys reading, swimming, riding horses and spending time with her granddaughter.

Darren Padget is a fourth-generation farmer in Oregon’s Sherman County, with a dryland wheat and summer fallow rotation currently producing registered and certified seed on 3,400 acres annually. Previously, Padget held positions on the Oregon Wheat Growers League board of directors and executive committee for seven years, serving as president in 2010. He chaired the Research and Technology Committee for the National Association of Wheat Growers (NAWG) and served on the Mid-Columbia Producers board of directors, for which he was an officer for 10 years.

Doug Goyings’ family has been farming in northwestern Ohio since 1884. Together with his wife Diane, son Jeremy, daughter-in-law Jessica and his twin grandsons, Goyings grows soft red winter wheat and has hosted numerous trade teams on their farm. With more than 35 years of experience representing wheat and Ohio agriculture, Goyings has been a member of the USW board while serving as a director for the Ohio Small Grains Checkoff Board since 2009 and is a past chairman of the USW Long-Range Planning Committee. He is also a past-president of his local Farm Bureau and previously sat on the board of directors for the Ohio Veal Growers Inc., Creston Veal, Inc., and Paulding Landmark, Inc.

Chris Kolstad’s family farm is in Montana’s “Golden Triangle” region. He and his wife Vicki have four children, including their son Cary who is a partner in their operation and the fifth generation of their family to farm. Kolstad grows hard red winter wheat, dark northern spring wheat and durum, barley and dry peas. As a commissioner of the Montana Wheat and Barley Committee, Kolstad has represented his state on the USW board since 2012. He is also an active member of the Montana Grain Growers Association and Montana Farm Bureau. His community leadership includes serving on his local school board, as treasurer for his family’s church and has been a regular blood donor since 1972.