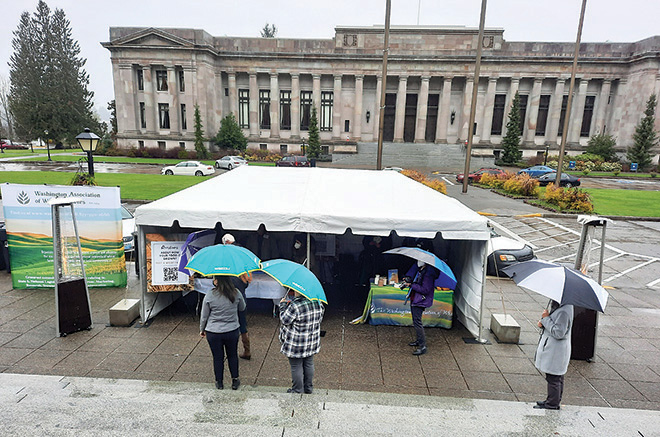 Despite a steady drizzle in Olympia, legislators and their staff lined up to get a freshly baked cinnamon roll and learn more about the Washington wheat industry from Washington Association of Wheat Growers’ members.

For the second year in a row, the Washington Association of Wheat Growers (WAWG) has had to modify its traditional, two-day visit to Olympia to meet with legislators.

Thanks to COVID-19 restrictions that kept legislators’ offices closed to the public or limited the number of people who could be in those offices, in February, wheat growers opted to host a breakfast off campus, which was well attended, and then move to the steps of the capitol building and hand out cinnamon rolls, coffee and educational materials. 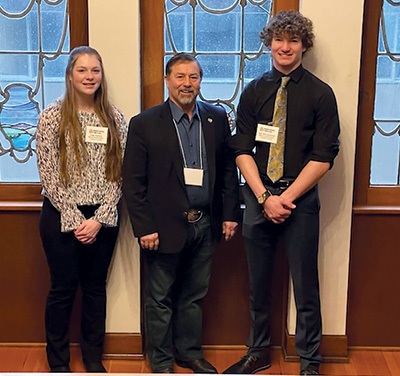 Sen. Mark Schoesler (middle) was one of the legislators who welcomed this year’s wheat ambassadors, Cadence Zellmer and Tate Nonnemacher. 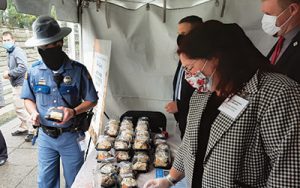 “Last year, we met with legislators remotely, but this year, with the shortened session and legislators’ busy schedules, we decided to change things up,” explained Michelle Hennings, WAWG’s executive director. “Because most offices were closed to us, we invited legislators to meet with us, off campus, for breakfast. We were able to have very productive, detailed conversations in a relaxed atmosphere.”

At the breakfast, growers discussed salmon recovery efforts, protecting the Snake River dams, funding for voluntary conservation programs, carbon policies, overtime requirements and more. Growers then moved to the capitol building, where, despite a steady rain, more than 350 cinnamon rolls were handed out to legislators and staff. This year’s ambassadors, Cadence Zellmer and Tate Nonnemacher, took part in the trip.

“I want to thank the growers who took time out of their schedules to make the trip to Olympia,” Hennings said. “It’s vital that legislators hear directly from farmers about the issues impacting agriculture, especially when so many of those legislators are from urban districts.”

Before heading to the capitol, wheat growers hosted a breakfast with legislators.