More than 500 wheat growers, industry representatives and stakeholders gathered Nov. 11-14 at the Davenport Grand Hotel in downtown Spokane, Wash., to take care of business, recognize industry leaders and hear updates on state and national issues. Attendees heard from motivational speaker Jolene Brown on the need for learning, growing and advocating in family businesses. Jack Bobo, senior vice president of Intrexon, explored the connection between food safety and public perceptions of risk and asked whether or not agriculture will save the planet by 2050 or destroy it. Mike Pearson, host of the television show Market to Market, looked at what might be driving agriculture for the next year. And throughout it all, Emcee Damian Mason kept the audience laughing, slinging one liners and jokes at anything that moved. 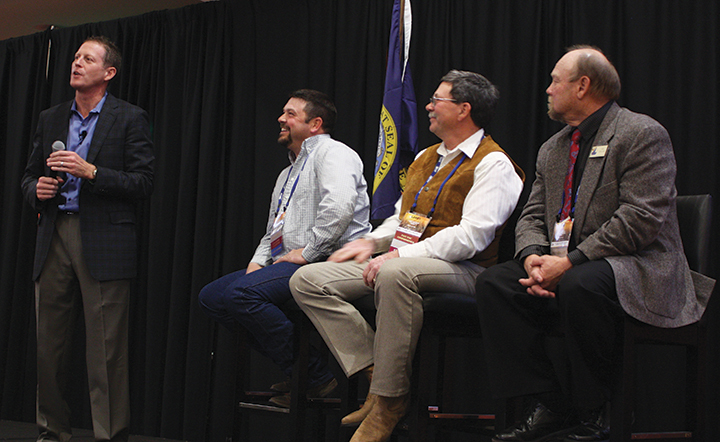 In what’s become a tradition, the outgoing presidents of Idaho, Washington and Oregon take to the stage to answer a few questions and take some good-natured teasing from emcee Damian Mason. Seated from left are Oregon’s Eric Orem, Washington’s Larry Cochran and Idaho’s Sid Cellan.

“After months of planning, organizing and stress, it was great to see the convention come off with no major hiccups,” said Michelle Hennings, the Washington Association of Wheat Growers’ (WAWG) executive director. “The staff put hundreds of hours into making this event successful, and they deserve to be recognized for all their hard work. We also want to thank our sponsors and exhibitors. Their support means we can bring in the top speakers in our industry to entertain and educate our membership.”

Not all of the convention was fun and games, however, as all three states took time to address business matters and hold annual meetings. At Washington’s annual meeting, WAWG members heard from several state agency leaders, including: 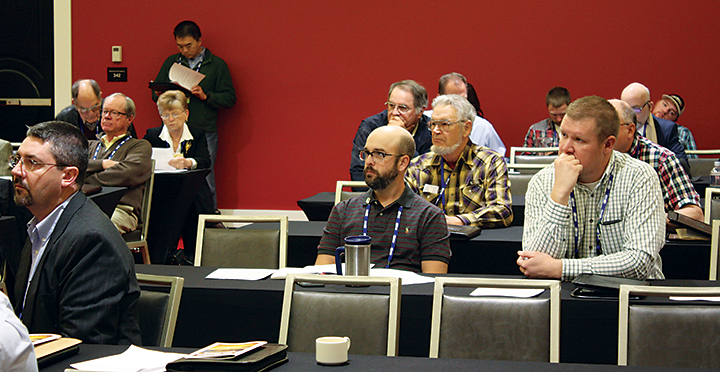 WAWG members take part in the all committee meeting during the convention. 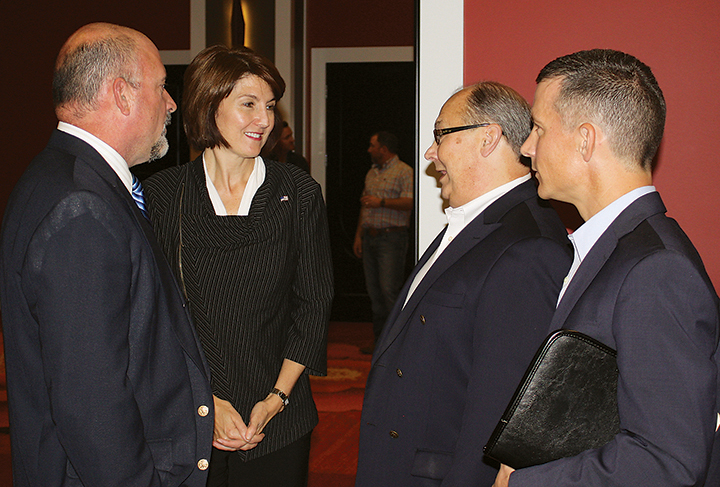 Congresswoman Cathy McMorris Rodgers (R-Wash.) stopped by the Washington awards banquet to brief growers on what’s been going on in the other Washington. Also pictured are (from left) Washington Grain Commissioner Mike Miller and Vince Peterson and Joe Sowers, both from U.S. Wheat Associates.

She also touched on events happening in Washington, D.C., including the Trans-Pacific Partnership and the recent budget agreement provision that includes $3 billion in cuts to the crop insurance program. After an outcry from farmers, commodity groups and other stakeholders from across the country, congressional leaders promised to remove the cuts when the spending bill is finalized this month.

“We sat down, and we got a commitment from everyone we needed to to make it right in the omnibus bill,” she said. “I am confident that we can make it right.”

Asotin County was recognized as the county of the year for its growers’ regular participation in state board meetings and regular meetings back at home. County President Bruce Petty accepted the award.

Marci Green was named WAWG member of the year. Green has been an active board member for the past seven years. She and her husband, Lonnie, farm in Spokane County.

The last order of business at the awards banquet was the handing over of the gavel to incoming president Kevin Klein by outgoing president Larry Cochran. Cochran thanked members for their support during the past year. The other 2015/16 officers are Ben Adams, vice president, and Green, secretary/treasurer. 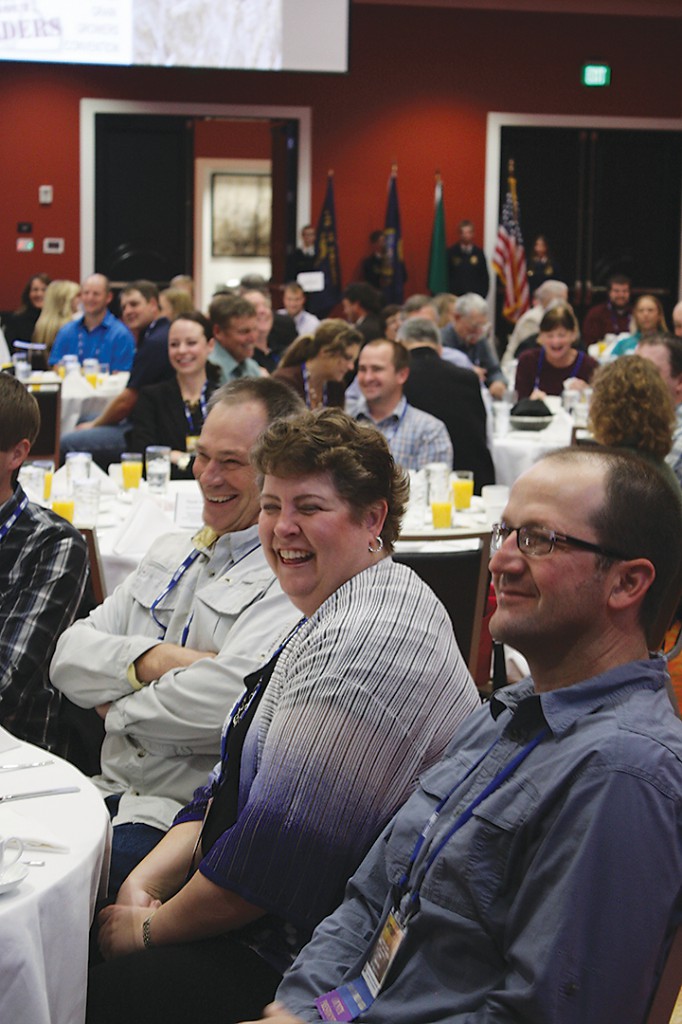 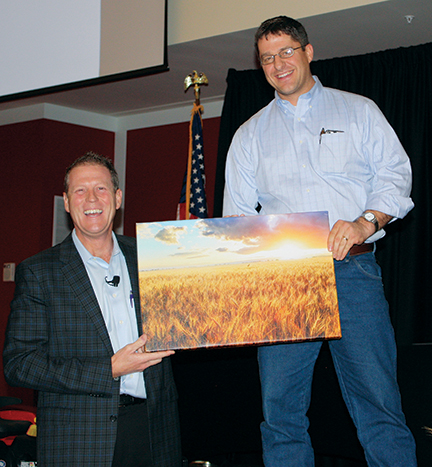 Incoming WAWG President Kevin Klein (right) gives emcee Damian Mason a print of a wheat field as a thank you gift from the three states. 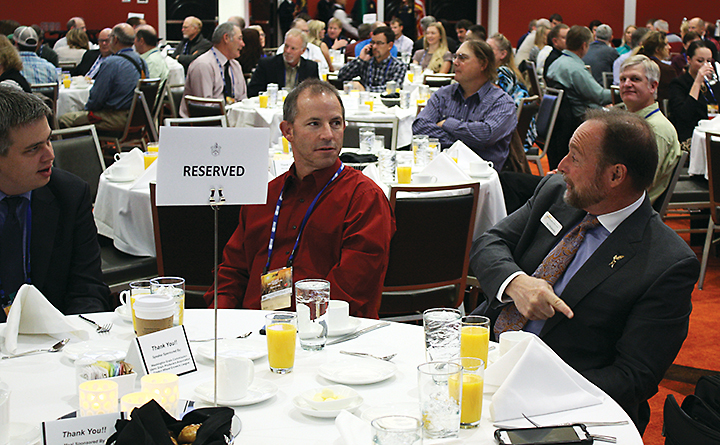 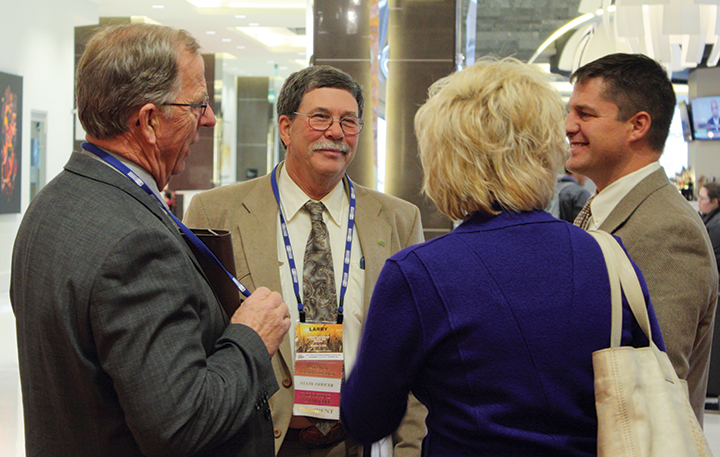 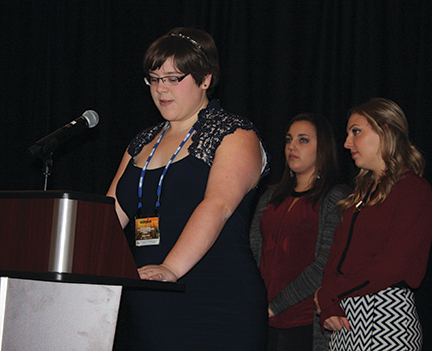 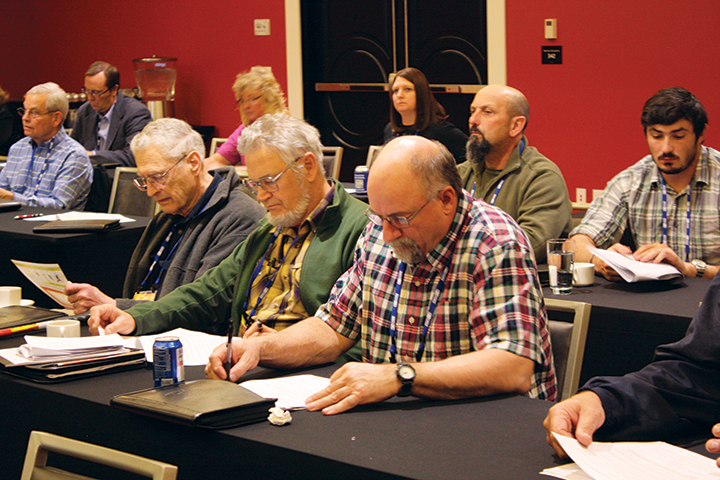 WAWG members reviewing and updating resolutions at the convention.