From smallgrains.wsu.edu A newly published Extension Bulletin, PNW696, is titled “Integrated Pest Management for the Wheat Head Armyworm Complex in the Pacific Northwest.” Since 2005, the wheat head armyworm has caused intermittent damage to wheat and barley crops in the region. The two insect species found responsible were initially dubbed the “true” and “false” wheat head armyworms. As these species are ... END_OF_DOCUMENT_TOKEN_TO_BE_REPLACED

Crop progress 6/11: Cooler weather arrived but did not stop work

June 13, 2017 Comments Off on Crop progress 6/11: Cooler weather arrived but did not stop work

From NASS There were 6.3 days suitable for field work last week. Pasture and range conditions were reported at 1 percent poor, 7 percent fair, 71 percent good and 21 percent excellent. A low temperature of 33 degrees F was reported in the northeast region, while a high temperature of 98 degrees was reported in the southeast region. Statewide differentials ranged from 5 ... END_OF_DOCUMENT_TOKEN_TO_BE_REPLACED

From the Capital Press A U.S. Department of Commerce investigation into steel imports could open the door for other countries to retaliate by imposing restrictions on their purchases of commodities such as wheat, U.S. Wheat Associates officials say. Read the story here. END_OF_DOCUMENT_TOKEN_TO_BE_REPLACED

By Trista Crossley For an industry that feeds and clothes the nation, not to mention much of the world, agriculture seems to be constantly under fire, accused of practices that are harmful to the environment and consumers. Last month, Washington Association of Wheat Growers Vice President Marci Green took part in a panel designed to address some of those misconceptions ... END_OF_DOCUMENT_TOKEN_TO_BE_REPLACED

From NASS There were 6.3 days suitable for field work last week. Pasture and range conditions were reported 1 percent poor, 6 percent fair, 72 percent good and 21 percent excellent. A low temperature of 42 degrees F was reported in the east central region, while a high temperature of 98 was reported in the southeast region. Statewide differentials ranged from 1 degree ... END_OF_DOCUMENT_TOKEN_TO_BE_REPLACED

From the Capital Press Farmers and ranchers described a private meeting with two of President Donald Trump’s cabinet members June 2 as unprecedented and historic. Instead of addressing the group, U.S. Agriculture Secretary Sonny Perdue and Interior Secretary Ryan Zinke listened and took notes, according to those who were there. “They just didn’t have an agenda. They truly wanted to ... END_OF_DOCUMENT_TOKEN_TO_BE_REPLACED

WAWG is run by farmers who volunteer their time and energy. As such, the organization is always looking for people to help out at education events, such as farm fairs, expos and the recent Almira Ag STEM day (above). Marci Green, WAWG vice president, puts out the request for more volunteers. She says: “The educational events are usually in spring, ... END_OF_DOCUMENT_TOKEN_TO_BE_REPLACED

Wheat grower meetings coming to a plot tour near you

May 30, 2017 Comments Off on Wheat grower meetings coming to a plot tour near you 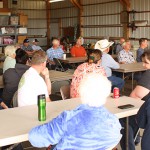 In the wheat world, summer’s long, hot days lead not only to harvest, but usually barbecues seasoned with plot tours and updates on county and state business. Most county wheat growers groups will partner with the Washington State University Extension Cereal Variety Testing Program to hold a county meeting immediately before or after one of their local plot tours. Washington ... END_OF_DOCUMENT_TOKEN_TO_BE_REPLACED