Barley leaf rust is found east of the Cascades

Barley leaf rust (caused by Puccinia hordei) was found in a couple of fields planted with facultative winter barley variety ‘Maja’ in Walla Walla County, Wash., near the Oregon border. By May 18, rust incidence was 100 percent and severity ranged from 40 to 100 percent.  According to the grower, the fields were planted last October and rust started appearing more than a month ago, but due to organic farming, the fields could not be applied with fungicides. He plans to cut the crops soon. 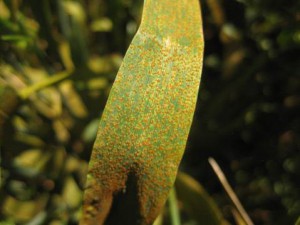 To my knowledge, this is the first observed barley leaf rust in the area east of the Cascade Mountain range in the Pacific Northwest (PNW). Before this occurrence, barley leaf rust had only been observed west of the mountain range. For example, the disease usually shows up in our nurseries in Mount Vernon (Skagit County) in late season as most barley varieties in production and nurseries are spring barley. In recent years, barley leaf rust has increased in severity, which has interfered with our screening for barley stripe rust. By the first week of May this year, we did not see leaf rust on barley in Mount Vernon. According to Dr. Patrick Hayes, barley breeder at Oregon State University, leaf rust has not observed in barley nurseries at Corvallis, Ore., this year. In the winter barley fields in Walla Walla, the crops are headed. It is apparent that infection occurred last fall, and the fungus overwintered due to snow cover. The rust inoculum was likely from western Oregon and/or western Washington last year. In 2016, the grower grew two crops in one of his fields about several hundred meters west of this year’s fields. The first crop was harvested in June, and the second crop of the same Maja variety was planted in July and harvested in November. He did not see rust in the first crop, but noticed rust in the second crop.  Spores from this field were likely blown to and infected the fields planted last October.

Most barley varieties in our nurseries in Mount Vernon in the recent years were susceptible to leaf rust. If you grow winter or spring barley for nonorganic production, please check fields. If you see leaf rust, consider applying fungicides. The popular fungicides which are used to control stripe rust and other foliar fungal diseases on cereal crops should control leaf rust. As leaf rust has not become a common disease in the barley production areas in the PNW, a big gap between barley crops may break the disease cycle. It will be better to avoid growing winter barley and spring (or summer) barley crops continually in the same area.

When we were checking fields on May 18, stripe rust reached 100 percent severity on susceptible varieties in Walla Walla and 90 percent in Lind in our nurseries. In commercial fields, stripe rust was generally under control in Umatilla County, Ore., close to the Washington border; Walla Walla, Columbia, Garfield and Asotin counties of Washington; and Nez Perce and Latah counties of Idaho due to resistance and/or fungicide application. Few fields in Garfield County had visible stripe rust foci.

As the weather has been and will continue to be favorable for stripe rust development, we still have a long way to go to control stripe rust for this crop season. Check fields for active stripe rust pustules and apply fungicides as needed. Varieties with ratings 4 and higher may need fungicide application; and those with ratings 1 to 3 generally do not need fungicide application. However, if active rust pustules are quite common (5 percent incidence), consider using fungicides.

Since the last update (May 5), stripe rust has been reported in Montana and Colorado, in addition to the previous reports in Texas, Louisiana, Arkansas, Mississippi, North Carolina, Oklahoma, Kansas, Washington, Oregon, Wisconsin, Virginia, Delaware, Tennessee, Michigan, Kentucky, Nebraska, Indiana, Georgia, Idaho, Arizona and California of the U.S. and Alberta and Ontario provinces in Canada.