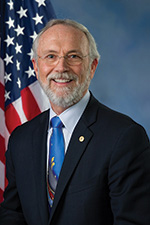 “With travel being curtailed during the pandemic, it has been more difficult for us to meet in person with our legislators, so we want to thank Rep. Newhouse for coming to Ritzville to sit down with us,” said Michelle Hennings, executive director of the Washington Association of Wheat Growers (WAWG). “We also want to thank those growers who took time away from harvesting to help us share our concerns with the congressman.”

One of the main topics the group discussed was the Coronavirus Food Assistance Program (CFAP) and the fact that four out of the six classes of wheat were deemed ineligible, including soft white wheat, the dominant class grown in Eastern Washington. Hennings told Newhouse that while growers are upset that the U.S. Department of Agriculture (USDA) only looked at market prices during two, five-day periods to determine eligibility, she is more concerned about potential problems with the 2020 crop (CFAP only applies to the 2019 crop) and what kind of relief USDA might be considering in the future.

“We want to make sure USDA knows what was wrong with the first round when it came to wheat, so when they consider 2020, we are the table,” she explained.

Hennings asked Newhouse what WAWG’s next steps should be, especially since both WAWG and the National Association of Wheat Growers (NAWG) have gone directly to USDA with their concerns about CFAP. Newhouse said future relief programs hinge on negotiations between the Senate, House and White House.

“Unfortunately, we don’t come in with a lot of answers on what the future holds,” he said. “We want to understand the challenges you are facing so we can communicate that to USDA.”

When asked what actions the wheat industry should be taking concerning the recently released Columbia River System Operations final environmental impact statement (EIS), the congressman said growers should be voicing support for the conclusions reached by the EIS (the preferred alternative did not recommend dam breaching).

On trade, Newhouse didn’t have any updates for the group and asked what kind of trade impacts they’ve been seeing lately due to COVID-19. Ben Adams, a grower from Douglas County and a WAWG past president, said as far as China goes, they’ve bought some soft white wheat, but they aren’t up to the levels they were prior to the tariffs going into effect. Hennings also pointed out that Washington wheat growers haven’t seen an increase in buying from Japan since the bilateral trade agreement happened. She added that most of Eastern Washington’s overseas customers are dealing with the pandemic just as the U.S. is.