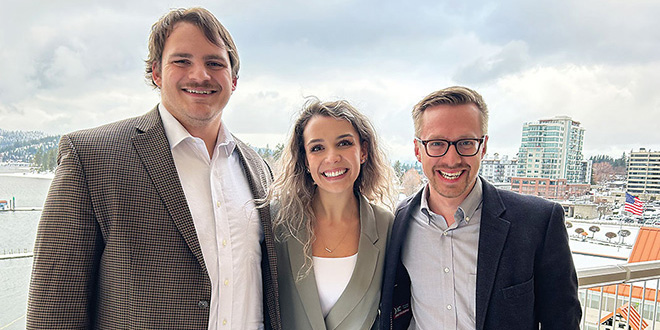 Taylor Williamson (left), government relations representative for the National Association of Wheat Growers (NAWG), and Jake Westin (right), NAWG’s vice president of policy and communications, gave an “inside the beltway” perspective of the 118th Congress at a break-out session during the 2022 Tri-State Grain Growers Convention. Also shown is Mariah Wollweber, NAWG director of communications and partnerships.

At one of the break-out sessions at the 2022 Tri-State Grain Growers Convention, growers got an “inside the beltway” perspective of the 118th Congress and potential impacts of the 2022 elections on wheat industry priorities.

Congress began the new session divided. There are slim majorities in both chambers with the Republicans holding the House and the Democrats holding the Senate. Leadership in the House is new, and many of the “old guard” on the Democrats’ side are stepping down, leaving untested minority leaders. From a farm bill perspective, 20% of senators are new to farm bills. In the House, that percentage is higher, at 46%. The Senate Ag Committee is expected to stay mostly the same, but there’ll be a change of leadership on the House side.

“There’s a lot of education we are going to need to do,” said Taylor Williamson, government relations representative for the National Association of Wheat Growers (NAWG). “There’s a lot of people that we don’t really know how they will react when we are bringing in different bills.”

Williamson was joined by Jake Westin, NAWG’s vice president of policy and communications. Westin said lawmakers on the House side have spent the past year holding field hearings and title-by-title hearings. He expects that with the change in House leadership, much of that work will be redone. The Senate side is just getting underway with farm bill hearings. NAWG expects that once the new Congress has been sworn in and committees have been assigned, both ag committees will kick off farm bill work in earnest, probably in late January or early February.

In the wheat industry, work on the farm bill has already ramped up. For the past year, NAWG has been testifying in farm bill title hearings. In September, the organization did a fly-in, bringing nearly two dozen producers to meet with more than 55 congressional offices. The industry has also set priorities that include:

“Many of these asks will cost money,” Westin said. “NAWG has been making the rounds of all four corners of the ag committees on how to get additional resources in the farm bill so we aren’t fighting other groups.”

NAWG is expecting to have to fight budgetary constraints, even though most of the farm bill funding will go to SNAP, and there’s usually talk of splitting the nutrition title off of the farm bill. Westin pointed out that keeping the nutrition title as part of the farm bill helps maintain a broad coalition and connects the urban/rural divide. There is also expected to be external attacks against the legislation from both the left and the right, such as the Environmental Working Group and the Heritage Foundation. Looming over everything is the 2024 presidential race.

“If they don’t get it done next winter, as you get into 2024, it probably won’t get done on time,” Westin said. “If they don’t pass a long-term farm bill, then the most likely outcome is a one- or two-year extension to get past the next presidential election.”

Besides the farm bill, other legislative and policy issues facing the 118th Congress include: