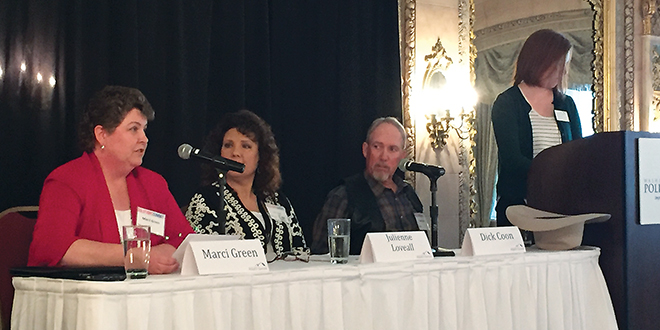 For an industry that feeds and clothes the nation, not to mention much of the world, agriculture seems to be constantly under fire, accused of practices that are harmful to the environment and consumers. Last month, Washington Association of Wheat Growers Vice President Marci Green took part in a panel designed to address some of those misconceptions at the Washington Policy Center’s Solutions Summit in Spokane, Wash.

Green joined Dick Coon, a past president of the Washington Cattlemen’s Association and a rancher from Benge, Wash., and Julie Loveall, a board director for the Washington Dairy Products Commission who runs a dairy with her husband in Colville, Wash. The panel was moderated by Madilynne Clark, the Washington Policy Center’s agriculture director.

“When I was first asked to speak here, I was intrigued by the title of how agriculture speaks environmental,” Green said. “At first glance, I thought environmental was the key word. But as I thought about it, I decided speak was the key word because the most important thing is that we are part of the conversation. A lot of times, we feel attacked by the environmental community, and we get defensive. Instead, we need to intentionally tell others about the great things we are doing for the environment. We depend on our natural resources, and in general, most farmers have a strong desire to leave the land in better shape than when they received it.”

Clark’s words echoed that thought. She kicked off the discussion by saying that farmers need to tell consumers why they choose the farming practices they do, and how those practices protect natural resources.

“Antifarming arguments ignore two simple truths. First, farm families live on the very land they are supposedly damaging. Second, many of these family farms are multigenerational and hope the farm will continue for many more generations,” Clark said. “So why would you destroy the land, destroy the water, destroy the air so you can no longer farm? You need the land, the soil to grow a crop.”

• In the past 60 or 70 years, agriculture has increased production by 156 percent, while reducing water-caused soil erosion by 85 percent and significantly reducing dust and stubble burning.

• No-till practices have reduced fuel consumption and helped sequester carbon in the soil. In 2014, the benefits of no-till were equivalent to removing 10 million cars from the road.

The panelists described how their operations are environmentally friendly. Loveall focused on how dairies manage their waste, from using anaerobic digesters to produce electricity to composting manure. She pointed out that compared to 1944, dairy farms produce a gallon of milk using 95 percent less land and 65 percent less water while producing 76 percent less manure. Nationwide, more milk is produced today with only 9 million cows than with 26 million cows in 1944.

Coon described how he protects water quality by using time-controlled grazing on a riparian pasture that buffers a small stream on his ranch. He explained that if vegetation is excluded from grazing, that area can easily end up covered in noxious weeds and become a biological desert.

“We have otters. We have beavers. We have muskrats. Ospreys and bald eagles stop there on their way north and south a couple of times a year. It’s because it’s a healthy, active ecosystem. We give those plants a chance to grow, but they aren’t going to thrive unless they are burnt, grazed, trampled or mowed. That’s my big message. The cow, whether it’s a cow, bison, elk, big horned sheep, any large grazing animal, they are going to insult the ground wherever they stand. It’s up to us, as managers, to control the timing of that insult,” he explained.

Green farms in south Spokane County, in an area that is being closely monitored for soil erosion into the Spokane River. Green said farmers in her area use no-till and mulch-till methods to disturb the soil as little as possible. They also utilize precision agriculture techniques to precisely place fertilizer where it will do the most good. Less fertilizer used means less of it is available to run off.

“We all want to keep that soil on the hills where we can utilize it and keep it out of the river. We work to keep the river and its tributaries in great shape for all of us to enjoy,” she said. “In southeast Spokane County, many farmers, including us, raise bluegrass seed. Grass is a perennial crop, so it is left in the field for three to five years. The soil isn’t disturbed at all during that time. That’s the epitome of no till. The plants also develop a root system, and that system filters the water as it flows through the soil and out of the field.”

The panelists also answered questions about how a carbon tax might impact their use of fuel, and how to deal with absentee landlords who might have different goals as to the use of leased land.