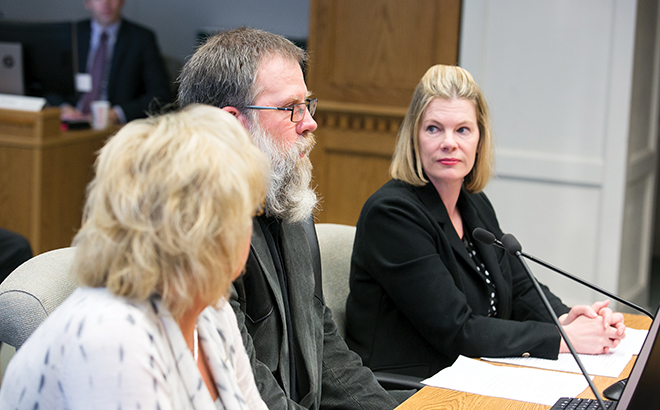 During last month’s trip to Olympia to advocate for the Washington wheat industry, several members and staff of the Washington Association of Wheat Growers (WAWG) testified in front of the Washington State Senate’s Agriculture, Water, Trade and Economic Development Committee during a public hearing on SB 5051, a bill relating to nondefault termination provisions in state land leases for agricultural or grazing purposes.

Chad Smith and Nicole Berg, both wheat farmers from Benton County, and Diana Carlen, the lobbyist for the Washington Association of Wheat Growers, testified on the effects of a decision last summer when with little advance notice, the Washington State Department of Natural Resources (DNR) decided to terminate several leases in Benton County that were not set to expire until 2020 or later.

Sponsored by Senators Sharon Brown, Judy Warnick, Jim Honeyford, Randi Becker and Mark Schoesler, the bill would require DNR to provide at least 180 days written notice before terminating an agricultural or grazing lease. The bill would also require the agency to provide written documentation to the lessee demonstrating that the department has included the leased land in a plan for higher and better use, land exchange or sale.

During her testimony, Carlen told the committee that while WAWG supports DNR’s mission to fund education by getting as much revenue as possible through leasing state lands, when terminating a lease early “…we feel their plans should be more concrete and transparent.”

DNR staffers also testified in support of the bill, acknowledging their poor handling of the Benton County situation and saying they “communicated poorly and late.”

Another sticking point for the Benton County farmers was the lack of reimbursement DNR offered for the early lease terminations. That topic was brought up by Sen. Marilyn Chase (D-Shoreline) who asked the DNR staffers, “Have you made just compensation for your screwing up?” DNR said compensation has been offered and accepted.

Sen. Brown (R-Kennewick), who was instrumental in helping the Benton County farmers get some reimbursement, thanked DNR for admitting they handled the situation poorly, but likened the compensation DNR offered to having a gun held to the farmers’ heads. She told DNR that compensation started at zero and what was eventually paid was far less than what should have been offered.

Also during the hearing, Hilary Franz, the new commissioner of public lands, introduced herself to the committee, saying that decisions in her department will be based on two pillars, strong environmental health and strong rural economies. She told the senators that she believed those two ideas can work together. She also reiterated that her department would be working on bettering communications within the department and out to the public.

“We need to be an outward facing agency,” she said.