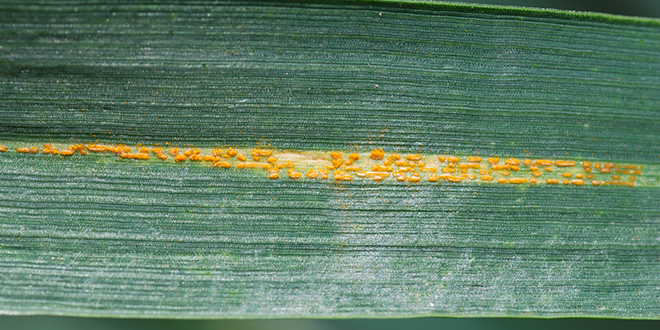 On March 3, we were checking wheat fields in Whitman, Walla Walla, Benton, Franklin and Adams counties in Washington. Winter wheat plants ranged from tillering (Feekes 2) to early jointing (Feekes 5). Big differences were observed in crop uniformity due to the soil moisture conditions last fall. We found stripe rust on susceptible varieties in winter wheat breeding nurseries in Central Ferry (Garfield County); our stripe rust experimental field in Walla Walla; commercial fields in Horse Heaven Hills (Benton County); east of Moses Lake (Grant County); and southeast of Odessa (Adams County). Stripe rust was very easy to find in the breeding and rust nurseries with incidence (number of plants with rust) between 1 and 3 percent. Some plants had several leaves, including top leaves, infected, and in some spots, two or more plants had rust. In commercial fields, finding stripe rust was easier in fields of the Horse Heaven Hills region than in fields between Moses Lake and Odessa. Rust incidence was less than 1 percent in commercial fields if rust was found. On Feb. 29, Pete Martin also found stripe rust in a field between Moses Lake and Odessa. Compared to the last year, the appearance of stripe rust is similar in Walla Walla, but this year, we found stripe rust in more locations. The development of stripe rust is much earlier than normal.

Recommendations for the Pacific Northwest

As stripe rust has been found in Oregon and Washington and is predicted to be severe, control of stripe rust is necessary this year. Some general recommendations for the eastern Pacific Northwest are the following:

2) For spring wheat, consider planting resistant varieties and avoid susceptible ones. Use the Seed Buyers Guide to choose varieties rated 1 to 4 for stripe rust and avoid those rated 5-9 if possible.

3) Based on some of the weather forecasts for the Pacific Northwest, we may have good moisture through May. This is good for high yield potential, but also good for stripe rust development. As this rust season has already started and is likely to be a much longer one than normal, second application may be needed around the flag leaf stage, depending upon the first time of fungicide application, rust redevelopment in the field, variety with high-level of high-temperature adult-plant resistance or not and weather conditions. General recommendation for using second application or not will be made late as the season and rust progress.

So far, stripe rust has been reported in Texas, Oregon, Louisiana, Arkansas, Oklahoma and Washington. Stripe rust was first found in Texas in January and developed quickly in the recent weeks. In the first week of February, stripe rust was reported in the Willamette Valley in western Oregon and near Hermiston in northeastern Oregon the second week of February. In this week, stripe rust was reported in Louisiana, Arkansas and Oklahoma, as well as Washington. Such early development and spreading of stripe rust in the southern Great Plains is earlier than normal and similar to last year, indicating another severe stripe rust epidemic throughout the Great Plains and further into the east regions. Application of fungicides is recommended for fields grown with susceptible varieties. Fungicide timing needs to be based on local recommendations.