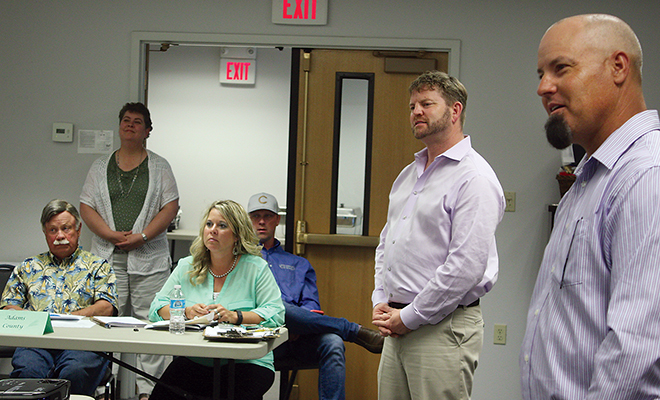 David Schemm (right), a wheat farmer from Kansas and current president of the National Association of Wheat Growers (NAWG), and Chandler Goule (second from right), CEO of NAWG, kicked off a visit to the Pacific Northwest (PNW) by attending the June state board meeting to tell growers what’s going on in Washington, D.C., and what issues NAWG is addressing.

It’s not unusual to have visitors at the Washington Association of Wheat Growers’ (WAWG) monthly board meetings, but last month’s visitors literally flew across the country to be there.

David Schemm, a wheat farmer from Kansas and current president of the National Association of Wheat Growers (NAWG), and Chandler Goule, CEO of NAWG, kicked off a visit to the Pacific Northwest (PNW) by attending the June state board meeting to tell growers what’s going on in Washington, D.C., and what issues NAWG is addressing. Caitlin Eannello, NAWG’s director of communications, also made the trip out.

Schemm and Goule addressed some of the top issues NAWG is working on, including the farm bill; trade; funding for research and market development; and budget cuts that could negatively impact crop insurance. Here are some of the highlights of NAWG’s presentation:

Trade. Goule said with the Trump Administration’s withdrawal out of the Trans-Pacific Partnership, the interest in Washington, D.C., seems to be more on bilateral agreements with individual countries and enforcing the trade agreements already in place. The U.S. has filed a World Trade Organization (WTO) case against China because they aren’t importing as much wheat as they are obligated to under their WTO agreement, and the country’s domestic subsidies are costing U.S. wheat growers approximately $640 million each year.

Looking closer to the U.S., Schemm said the administration’s decision to renegotiate the North American Free Trade Agreement (NAFTA) is “more palatable than pulling out of NAFTA, but it obviously still raises a lot of concerns and challenges.” NAWG has submitted comments to the ag secretary, and both NAWG and U.S. Wheat Associates (USW) will be testifying in front of the U.S. Trade Representative about the importance of NAFTA negotiations—about 20 percent of U.S. wheat exports go south to Mexico.

Finally, Goule and Schemm touched on funding for the Market Access Program (MAP) and the Foreign Market Development (FMD) Program. NAWG recently passed a resolution to support doubling the funds allocated to these programs, but in the president’s proposed budget, they were zeroed out despite studies that show a 35-to-1 return on investment.

“Obviously, we were very disappointed when we saw the proposed budget cut that zeroed out MAP and FMD funding,” Schemm said. “This is a huge return on investment. I don’t know about you, but if I can have a return of 35 to 1 on my wheat, I’m okay with that. I can make that work.”

NAWG will be coordinating with U.S. Wheat Associates, the marketing arm of the U.S. wheat industry that heavily relies on MAP and FMD, to protect the funding for these programs.

Farm bill. Schemm and Goule addressed some of the political dynamics at play in the 2018 Farm Bill, including the need to keep the nutrition title as part of the farm bill and working with other commodities to come up with common goals. In addition, the lack of support programs for both the cotton and dairy industries will need to be addressed.

“Once we get the allocation for the farm bill, we are going to have to take a chunk of that to fund both of these commodities, and then we’ll figure out what our PLC (Price Loss Coverage) price is, what ARC (Agriculture Risk Coverage) is going to be, and will we be able to add new crop insurance programs,” Goule said.

NAWG’s leadership and NAWG members have submitted testimony at both House and Senate ag committee listening sessions on the wheat industry’s priorities for the 2018 Farm Bill.

Some of the biggest threats to the farm bill programs come from the appropriations process moving funding from one program to another, sequestration and attacks by groups such as the Heritage Foundation that want to dismantle the farm bill, including the nutrition title.

Goule, who has worked on previous farm bills, said he’s hearing that the 2018 Farm Bill will not be a rewrite of the previous farm bill, but just tweaked. However, the lack of progress on political appointments within the U.S. Department of Agriculture (USDA) could hamper the bill’s progress. He explained that farm bill negotiators often rely on technical assistance from the USDA to understand if and how rules might be applied.

“I think our biggest problem is going to be timing. I actually think President Trump will sign a farm bill if we can get a farm bill to his desk,” Goule explained. “But until we have them (the appointed political positions filled), I don’t see how we can move much further in pulling a farm bill together. What if we wrote the language, and then the USDA comes back and says, ‘we can’t implement this’?”

Both Goule and Schemm encouraged growers to engage both with their elected officials and with the public. Goule said NAWG will be putting out action alerts, and when those happen, growers need to call their congressional delegation. Growers can follow NAWG or WAWG on social media to see those alerts. They will also be emailed to growers who are signed up to receive WAWG’s Greensheet.