One of the break-out sessions at the 2019 Tri-State Grain Growers Convention last month took a look at what’s happening on the policy front at the national level. 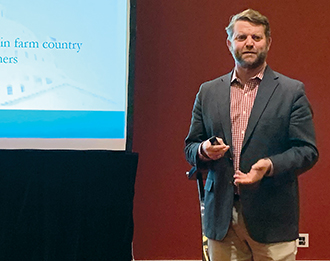 Chandler Goule (above), CEO of the National Association of Wheat Growers (NAWG), and Josh Tonsager (below), NAWG vice president of policy and communications, headed a break-out session at the 2019 Tri-State Grain Growers Convention that covered NAWG’s role; production trends and economic conditions in farm country; policy issues and implications for wheat farmers; and upcoming political challenges.

NAWG works with 20 state associations and many coalition partners on federal farm policy issues and environmental regulations and seeks to unite the wheat industry around common goals. It offers leadership development training, education for legislators on wheat industry issues and works with its state partners to address concerns at the national level.

Goule touched on current wheat production trends, noting that since 1920, acres planted has dropped from 77 million acres to 45 million acres today, while production has doubled in that same time period from 952 million bushels to 1.9 billion bushels. Average yields have also dramatically increased, from 12.9 bushels per acre in 1920 to 51.6 bushels per acre in 2019. Unfortunately, despite those gains, wheat is still running behind other commodities, such as corn and soy, due to the lack of genetically engineered (GE) varieties. 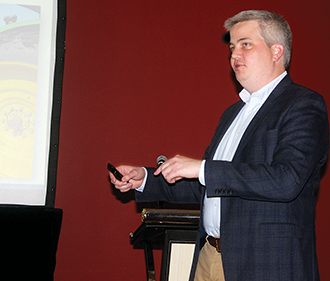 “When you compare with other commodities that have adopted GE or GMOs, we are still falling behind on how much we can produce per acre,” Goule said, adding that while many growers are ready to adopt GE varieties, neither export markets nor the public are. That’s primarily because wheat is thought of as a “food” grain, rather than a “feed” grain, like corn.

Any farmer will tell you that economic conditions right now aren’t great. Goule pointed out that chapter 12 bankruptcy filings have increased 24 percent in agriculture over the last 12 months, and in the northwest (Washington, Oregon, Idaho, Montana and Wyoming) that number has risen by 74 percent. The U.S. Department of Agriculture (USDA) projects 2019 net farm income at $88 billion, but 2019 farm debt is projected to be a record high $416 billion. To put a pin in it, 40 percent of this year’s income to farmers ($33 billion) will come from trade assistance, disaster aid, farm bill programs and crop insurance indemnities.

“We’ve presented these numbers to the Senate and House agriculture committees,” Goule said. “We’ve been very clear with the administration, that even with MFP (the Market Facilitation Program) and crop insurance, we are just barely keeping our growers from going out of business. Nobody is making money in this situation, and we are going to have to do something, primarily to fix our trade agenda so we can continue to export and pull these prices up.”

Turning to policy issues, Tonsager touched on the tough harvesting conditions growers in the northern Plains states have encountered this year. NAWG is working to get disaster assistance for quality loss issues in wheat caused by excess moisture. NAWG is also closely monitoring 2018 Farm Bill implementation, including changes to conservation programs and working with the Risk Management Agency to implement a provision to help growers deal with quality adjustments when no indemnity payment is triggered. And even though the ink is barely dry on the 2018 Farm Bill, Tonsager said NAWG is already preparing for the next farm bill.

“The current farm bill expires in 2023. We have to start anticipating what additional changes we want to pursue. If there’s things we want to take a look at that require studies and analysis, that takes time and takes money, so there are maybe things we need to start looking at over the course of the next couple of years,” he explained.

Other policy issues that NAWG is working on include full funding of agricultural priorities in the current appropriations bill and, of course, trade policy issues, such as passing the U.S.-Mexico-Canada Agreement, the tariff battle with China and reauthorization of the Grain Standards Act.

Finally, both Tonsager and Goule discussed possible leadership changes in the House and Senate ag committees. There is a possibility that all four of the ranking members may leave the committees. Rep. Mike Conaway (R-Texas) and Sen. Pat Roberts (R-Kan.) are both retiring, while Rep. Collin Peterson (D-Minn.) is facing a potentially tough re-election campaign. While Sen. Debbie Stabenow (D-Mich.) is not retiring or up for re-election, Tonsager said she has an opportunity to become ranking member on other committees, so she could potentially leave the ag committee.