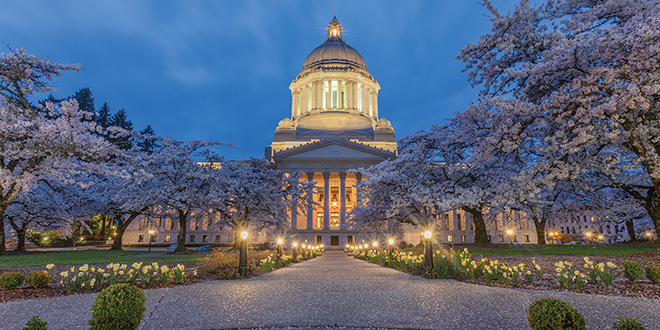 On Jan. 10, the Washington State Legislature will be back for a 60-day session. It is the second year of the legislative biennium and a “short” legislative session. Legislators will meet in a “hybrid” format, conducting some activities virtually and some in-person. All committee work will be completed again through Zoom and aired on TVW, with the public testifying remotely.

While legislators attempted to lower expectations for the forthcoming short session, the lengthy list of emerging legislative proposals suggests the 2022 session will once again be fast-paced and filled with robust policy discussions. Developing discussion topics include changes to the Long-Term Care Act; transportation funding; policing and public safety; climate and decarbonizing efforts; salmon recovery and culvert replacement; amendments to the Growth Management Act; COVID-19 restrictions; and more.

Politically, Democrats continue to hold the majority in both the state House of Representatives and the Senate. However, the Senate is leaning more to the left after moderate Sen. Steve Hobbs was recently appointed as the secretary of state and replaced with a more progressive member, Rep. John Lovick (D-Mill Creek), in the Senate.

To kick off the budget development process this session, the governor released a proposed $62 billion supplemental operating budget that would increase spending on efforts related to homelessness ($800 million), climate change ($626 million) and salmon recovery ($187 million). No new tax increases are included in the proposal due to robust state revenue collections.

In addition to releasing his proposed supplemental budget, the governor released his policy priorities for the 2022 session, including climate change and salmon recovery. Fossil fuel use in buildings looks to be the next frontier on climate change at the state level. Gov. Inslee is proposing a package of measures whose end goal is to require all-electric appliances for space and water heating. The statewide phase-out of natural gas energy would apply to all new construction beginning in 2034. The governor is also proposing legislation to allow utilities to expand incentives to entice property owners to switch from fossil fuel heating to cleaner electric heating.

The Washington Association of Wheat Growers (WAWG) is opposed to policies that eliminate the use of natural gas because they limit the ability of farmers to choose the energy source that best meets their needs and will increase costs and force farmers to rely entirely on the electric system.

Natural gas is used in the agriculture industry from every stage of food cultivation, harvesting and delivery. Natural gas is also used to fuel the heating systems in the homes of families that live on farms. With natural gas, families enjoy reliable supplies of heat throughout the colder months.

WAWG will also be actively engaged in discussions regarding the governor’s proposed salmon recovery efforts. The governor has announced a proposal to set new standards for salmon habitat protection, including riparian buffers, but has not released specific details and, unfortunately, has not engaged with agricultural stakeholders in developing these proposals. In addition, the governor has proposed $1.5 million in the budget to identify whether there are reasonable means for replacing the benefits of the four lower Snake River dams. WAWG is disappointed in the focus of studying breaching the dams. The issue has been thoroughly studied, and dam breaching has been repeatedly rejected. The removal of the four lower Snake River dams would cost the U.S. more than $2.3 billion over the next 30 years, lead to significant additional carbon emissions that contribute to climate change, and jeopardize health, safety and livelihoods in already economically fragile local and regional economies.

WAWG will be supporting legislation sponsored by Rep. Larry Hoff to provide seasonal flexibility from paying overtime for agricultural workers. Last session, the legislature passed legislation to phase in overtime for agriculture workers, but did not offer any seasonal flexibility for harvest. Rep. Hoff’s proposed legislation would allow an agricultural employer to select 12 weeks a year where a farm worker would work up to 50 hours a week without the employer having to pay overtime.