Stripe rust is widely occurring in the PNW

On April 5, we were checking wheat fields in Whitman, Garfield, Columbia, Walla Walla, Benton, Franklin and Adams counties of Washington and Umatilla County of Oregon. Winter wheat ranged from Feekes 2 to 7. We found stripe rust in all of these counties and about 80 percent of more than 70 fields checked. For most fields, it did not take very long to spot rusting leaves. 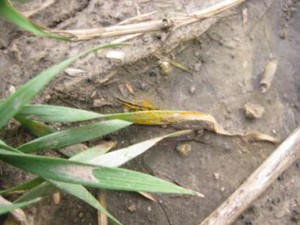 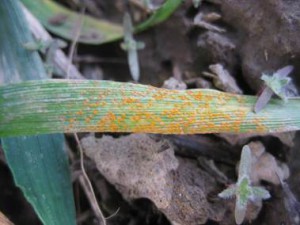 Figure 2. Stripe rust in a commercial field in the Palouse region of Eastern Washington, April 5, 2017.

In the Palouse region, several rust leaves were found in susceptible wheat borders in our experimental field near Pullman (Figure 1) and a commercial field planted with SY Ovation between Albion and Colfax, about 10 miles north of Pullman (Figure 2). Rust was on low leaves and incidence (number of plants) was less than 1 percent. About 1 to 5 percent incidents of stripe rust were found in fields between Colfax and Dusty in Whitman County. The appearance of stripe rust in the Palouse region is about one month earlier than normal and not too much later than 2011 (the most severe epidemic) or last year (severe epidemic).

Stripe rust is more active in the Walla Walla (Washington) and Pendleton (Umatilla County, Ore.) areas. In our experimental nursery north of Walla Walla, back on March 8, it took quite bit time to find rust in the spreader rows. Yesterday we saw rust of 100 percent incidence, over 40 percent severity on low leaves, and appearing on top leaves (Figure 3). Many fields in these areas have been sprayed with fungicides.

In the Hermiston area (also Umatilla County, Ore.) and remaining counties of Washington, stripe rust incidence ranged from less than 1 percent to about 5 percent, occurring on single leaves or on many leaves in rows up to several feet long (Figure 4). Generally, the rust prevalence and severity in these areas is lower than this time last year due to the lower temperatures. 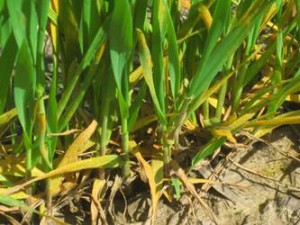 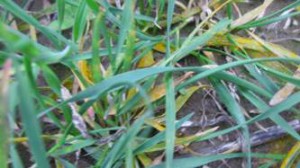 So far, stripe rust is widespread in the Pacific Northwest. Weather conditions will continue favoring stripe rust infection and development in April, and we will have another year of severe epidemic. HTAP resistance is not expected to fully function until night temperatures are consistently above 50 F and day-time temperatures are consistently above 65F.

So far, stripe rust has been reported in Texas, Louisiana, Arkansas, Mississippi, North Carolina, Oklahoma, Kansas, Washington, Oregon and Wisconsin. Stripe rust was reported in Louisiana and Texas in the first week of February, but prevalence and severity has been low. The early appearance of stripe rust in Wisconsin indicates that the fungus has overwintered there. Stripe rust was reported in Colorado and Michigan last November, but has not been reported so far in this spring. Although stripe rust has been low in the southern part of Great Plains, the pathogen has appeared in southern Kansas and still has time to spread further north and east. The storm from Texas and Louisiana to Nebraska and southern Iowa in the week of March 22 may have brought rust spores from the south to the north. If infection occurred during that week, stripe rust would show up in the central Great Plains in one to two weeks.