EPA gets international calls to not ban chlorpyrifos

From the Capital Press Congressional Republicans, a pesticide maker and foreign trading partners are joining U.S. farmers in asking the Environmental Protection Agency to rescind its pending ban of chlorpyrifos. Meanwhile, labor, environmental and anti-pesticide groups are pressing the EPA to follow through and prohibit chlorpyrifos residue on food on Feb. 28. In a letter to EPA Administrator Michael Regan, ... END_OF_DOCUMENT_TOKEN_TO_BE_REPLACED

Last week, the Washington Association of Wheat Growers (WAWG) and the Washington Grain Commission (WGC) received word that their support for a new wireworm seed treatment had been successful. Teraxxa, manufactured by BASF, was approved in mid-January by the Environmental Protection Agency for use in 2021, just in time for spring seeding. The Washington State Department of Agriculture (WSDA) approved ... END_OF_DOCUMENT_TOKEN_TO_BE_REPLACED

From AgriPulse Agriculture, consumers, and the environment prevailed against California’s attempt to require producers to incorrectly declare that glyphosate causes cancer. At issue was California’s Proposition 65 requiring its Office of Environmental Health Hazard Assessment to maintain “a list of those chemicals known to the state to cause cancer.” Prop 65 requires that this list automatically include any substances listed ... END_OF_DOCUMENT_TOKEN_TO_BE_REPLACED

From the Capital Press The Environmental Protection Agency defended the pesticide chlorpyrifos on Tuesday, telling a three-judge panel in San Francisco that the agency has never found that exposure limits set in 2006 were unsafe. EPA’s attorney, Mark Walters, disputed claims that the agency’s studies support a ban. “It is inaccurate to say that the EPA has made a series ... END_OF_DOCUMENT_TOKEN_TO_BE_REPLACED 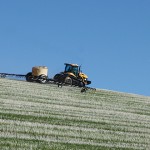 From Washington Friends of Farms & Forests The Washington State Department of Agriculture (WSDA) is proposing to transition to a modern testing platform that will benefit pesticide license applicants and their employers. To create a new and improved testing system, they plan to increase testing fees and change how exams administered. To accomplish this, WSDA must revise state rules that ... END_OF_DOCUMENT_TOKEN_TO_BE_REPLACED

A coalition of national grower trade associations that represents farmers, ranchers and their families nationwide is urging the U.S. Court of Appeals for the Ninth Circuit to reject an NGO call to invalidate EPA’s dicamba existing stocks order for three dicamba products whose registrations were immediately vacated by the court earlier this month. The American Farm Bureau Federation, American Soybean ... END_OF_DOCUMENT_TOKEN_TO_BE_REPLACED

From the Capital Press Besieged by lawsuits and a rising tide of weeds resistant to its popular Roundup herbicide, German chemical giant Bayer is touting a landmark discovery — a new molecule that will kill resistant weeds using a different mode of action. END_OF_DOCUMENT_TOKEN_TO_BE_REPLACED

In February’s Wheat Life, in the Washington Grain Commission section, Washington State University Extension published a best management practices (BMPs) insert to help farmers manage herbicide-resistant weeds. According to the insert, BMPs are critical to the long-term sustainability of wheat production in the Pacific Northwest. Using BMPs is the most effective way to address herbicide-resistant weeds, especially when incorporated into a long-term weed ... END_OF_DOCUMENT_TOKEN_TO_BE_REPLACED

From NAWG Today, the National Association of Wheat Growers (NAWG) submitted comments to the Environmental Protection Agency’s (EPA) interim registration decision for glyphosate. NAWG president and Lavon, Texas, farmer, Ben Scholz, made the following statement: “Glyphosate has been on the market for more than 40 years (1974 initial registration) and has passed multiple scientific reviews in each of its over 100 ... END_OF_DOCUMENT_TOKEN_TO_BE_REPLACED