While there was much talk of trade during the 2019 Tri-State Grain Growers Convention, the importance of the Columbia-Snake River System was also on growers’ minds. 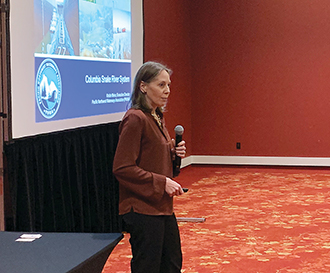 Kristin Meira, executive director of the Pacific Northwest Waterways Association, gave a break-out session on the important role the river system plays in shipping products to market. She said lots of bulk products move on the river and offered some facts:

Regarding the role the dams play in salmon populations, Meira said that juvenile salmon survival at the dams now averages 97 percent, which is higher than some undammed rivers, according to the National Oceanic and Atmospheric Administration (NOAA). She also said poor ocean conditions are having a large impact on salmon survival.

“We need to learn more about the oceans and make sure we are realistic about the role we can play (in increasing salmon populations),” she said.

Meira also talked about the lower Snake River dams and the push by some environmental groups to tear down the dams to provide orcas with more food, specifically the Southern Resident Killer Whales, which are home based in Puget Sound but range from southeast Alaska down to California. She said NOAA, the agency that is responsible for the recovery of the species, has highlighted several factors that impact orca populations, including contaminants and vessel traffic in Puget Sound and other species that prey on salmon, such as seals.

Nearly 10 percent of all U.S. wheat exports move through the Snake River dams, and they are an important source of clean energy via hydropower. Meira said some dam breaching proponents have suggested that Bonneville Power Administration (BPA) doesn’t need the power from the Snake River dams anymore, but BPA has made it very clear “that those dams are important to their portfolio.”

BPA, the U.S. Army Corps of Engineers and the U.S. Bureau of Reclamation are currently wrapping up a federally mandated environmental impact statement (EIS) on salmon and the Columbia-Snake River System. A draft EIS is scheduled to be released in February 2020 with the final draft expected in June or July. The public will be able to comment on the draft EIS, and Meira said it is extremely important that growers weigh in, not only on the EIS, but to their legislators as well.

“This is your time to use your voice and tell the agencies and the governors (of Idaho, Oregon and Washington) how you feel,” she said.