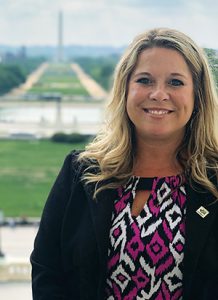 The first half of this year has been a challenge, to say the least, both professionally and personally. I’m normally a very social person, and not being able to interact and converse face to face with family, friends and coworkers due to COVID-19 has been really tough. The one positive from the whole ordeal was that I’ve been able to spend more time with my family.

I’ve definitely experienced Zoom fatigue. There are so many meetings, and you try to participate in all of them to make sure you are on top of all the issues so you could piece together the moving parts…with Zoom, I feel like there is no concept of time, and it almost feels like it was more intense than traveling to our meetings.

At the end of last year, we began planning how we were going to carry out our advocacy if we couldn’t travel to Olympia or Washington, D.C., to meet with legislators. We knew most of our efforts would have to be virtual, and I was worried we’d have a harder time making a connection. And it was tougher. Meeting in a lawmaker’s office or testifying in person in a committee hearing is much more effective. There are so many nonverbal nuances that get lost when you’re just a picture on a screen, not to mention all the technical glitches that seem to accompany nearly every Zoom meeting I’ve ever been on.

When we talk about meeting with our elected officials, sometimes we forget to talk about the other, nearly as important meetings we have with their staff. Usually, those meetings take place at a reception or a dinner. It’s a much more relaxed atmosphere, and we are able to get to know them, and they can get to know us. Staffers are the key to knowing what’s going on behind the scenes, and they usually have a direct line to the boss.

This past year, we missed out on a lot of those networking opportunities, which is a big deal, especially with a new administration and lots of new faces at both the state and national levels.

There were some positives to advocating virtually. It was a little easier to book meetings with lawmakers at the last second, we were able to spread those meetings out (instead of trying to pack them in in two days), and we were able to testify in more committee hearings than we usually do. However, because it was easier for everyone else to testify as well, many times, we only had one or two minutes to make our case on why a particular piece of legislation was going to hurt our industry. I feel like that’s nearly impossible to do, especially with the complicated issues we were talking about.

Overtime in agriculture and retroactive overtime pay was one of those complicated issues we dealt with at the state level. From the beginning, we felt it wasn’t right that farmers were in danger of being penalized for following the law for the past 60 years. We felt very strongly that it was an issue that had to be addressed by ALL of agriculture, not just the more labor-intensive sectors. With the current climate in Olympia, fighting issues individually just wasn’t going to get us a positive end result.

As negotiations dragged on and it became clear that some legislators weren’t interested in rectifying the court decision that struck down the overtime law, wheat growers had to make a decision. Would we support a compromise bill that would subject agriculture to overtime pay, but stop the industry from having to pay three years’ worth of back wages or not? We made the decision to band together as ag to support an end result that would be beneficial to the industry overall. We fought to include a harvest exemption in the bill, but that effort fell short. However, I’m proud of our work, and we didn’t fail without a fight. We plan to work hard on getting a harvest exemption next year and will, hopefully, talk some sense into the legislators that just don’t get it.

Carbon is another issue we worked hard on. As I’ve said before, this issue has legs and arms and will walk. We have to deal with it, especially since our state government has made carbon a priority by passing a low carbon fuel standard and a carbon tax. Both of these bills will increase fuel and other input costs for farmers, not to mention rural residents who generally just have to drive more than the urban population. At the national level, we are working to make sure that any type of carbon market or climate legislation is voluntary, benefits the grower and recognizes that farmers sequester carbon by growing crops. Growers shouldn’t be forced to implement costly practices that aren’t suitable for their unique growing conditions. There are many questions still to be addressed, such as how will the government help farmers make these changes, who will administer a carbon market, and what about farmers who have already put many of these practices in place?

Infrastructure has been a hot topic this year, thanks to Rep. Simpson’s dam-breaching proposal, which is causing us grave concerns. It’s also an issue much bigger than the Washington wheat industry can take on alone. Our dams are under constant scrutiny, and it’s important we join coalitions and fund efforts defending the dams and barging, which is the cleanest, most carbon-friendly mode of transportation available to us. We have allocated more money in this year’s budget to help address infrastructure.

Regarding Rep. Simpson’s proposal, the big elephant in the room is Idaho dams don’t have fish passage. Before the Congressman starts targeting our dams, he needs to take a look in his own backyard! Through today’s technology, dams and fish can coexist. The wheat industry in the Pacific Northwest is united in our message that the lower Snake River dams should not be removed. We are looking for an opportunity to discuss our talking points with Congressman Simpson and explain why his proposal hurts agriculture.

Our meeting season may be over for a few months, but that doesn’t mean we are relaxing. We are dealing with a number of issues, not the least of which is this drought. We are reviewing a federal program, the Wildfire and Hurricane Indemnity Program Plus, which covers quality losses due to natural disasters, to see if it can help our growers. We’ve also asked Gov. Inslee to make a disaster declaration for wheat counties to open the door to federal resources. And then there’s the farm bill. It feels like we just got done with one, but now it’s time to start working on the next. We are working with NAWG to set our priorities for this farm bill. As always, protecting crop insurance will be one of our priorities, but we will also be watching the conservation title very, very closely.

All of these issues are ongoing and developing a strategy to deal with them is critical to successful policy work. There’s another way we advocate, and that’s by financially supporting legislators who are sympathetic to agriculture. We do that through our political action committee, the Washington Wheat PAC. In today’s political climate, you have to “pay to play,” and it’s critical that we help ag-friendly legislators get into leadership positions, especially in the state legislature. I think it’s safe to say that most of the legislators in Eastern Washington are on our side, so we need to target urban legislators who can help us. I understand this next year may be tough, financially, due to the drought, but I hope, if you can, you’ll consider donating to the PAC.

One last plug. WAWG is a nonprofit, member-led organization. We exist to support and represent our growers, and as a group, we help make growers’ voices heard in Olympia and Washington, D.C. If you aren’t a member, please consider joining. If you are a member, thank you for your support. I also want to thank our amazing team of officers and our WAWG staff. We’ve had a crazy year so far, and the main reason we’ve been successful is that we’ve all pulled together. I’m always available to talk. You can always contact me at michelle@wawg.org or by calling (509) 659-0610.