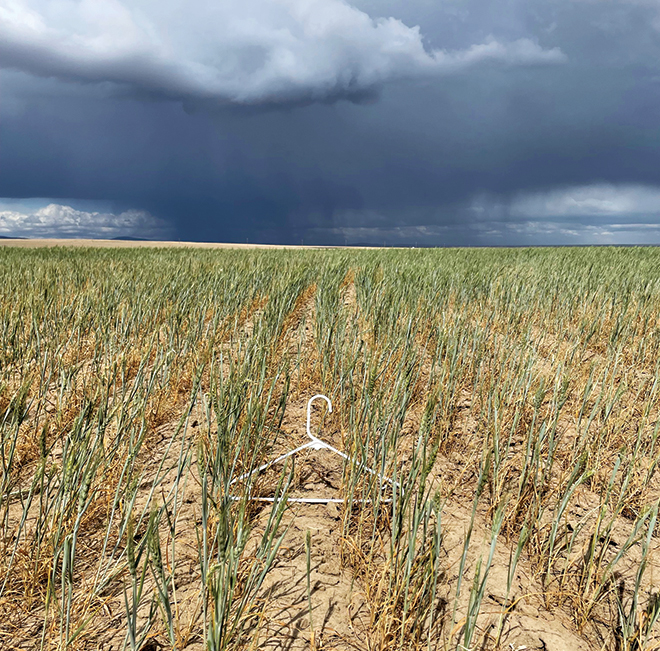 A photo taken by Benton County farmer Nicole Berg highlights the effects of the drought on her crops. Stories on the lack of rain featuring Eastern Washington growers ran in local and national media. Unfortunately, Berg said the storm in the background didn’t manage to make its way over her fields.

They say a picture is worth 1,000 words, but a combination of both brought a big spotlight on the drought conditions in Eastern Washington and highlighted how important crop insurance is to farmers.

In June, Nicole Berg, a grower in Benton County and vice president of the National Association of Wheat Growers, sent out photographs of a coat hanger in her wheat field to illustrate how poorly her crops were doing because of the drought. The photographs made the rounds of social media and caught the eye of Anna King, a writer for Northwest News Network. The story was picked up by NPR and became the top story for NPR’s national feed for a brief time.

“This definitely the driest, kind of late winter and going into spring that I’ve seen,” he says in the video.

In the latest drought monitor, all Eastern Washington counties are categorized as having a level of moderate drought. Every major wheat producing county except Douglas County is at least partially categorized as experiencing extreme drought. Crop insurance will be critical for many farmers this year, emphasizing the need for a strong safety net.

“It’s going to be a difficult year, and it’s very important that farmers do have crop insurance. They aren’t going to get 100 percent of their crop back,” Hennings says in the KXLY segment.

Hennings also gave an interview to RFD-TV, telling the station that if the region doesn’t see precipitation later this summer and into the fall, the drought could impact the 2022 winter wheat crop as well.

You can read the Northwest News Network’s story here. The KXLY segment is here. And the RFD-TV interview is here.