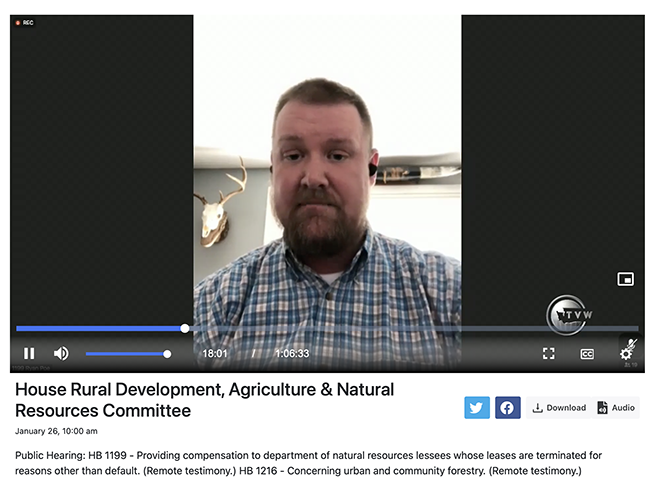 Earlier today, Ryan Poe, president of the Washington Association of Wheat Growers, testified in support of HB 1199, a bill that would provide compensation to Washington State Department of Natural Resources lessees whose leases are terminated for reasons other than default. The bill was being heard in the House Rural Development, Agriculture & Natural Resources Committee.

The hearing was recorded on TVW and can be seen here. Poe’s comments start at the 16:11 mark.

“Good morning Chair Chapman and members of the Committee:

For the record, my name is Ryan Poe.  I am a 5th generation farmer from Hartline, Wash.

I am also the president of the Washington Association of Wheat Growers.

The Washington Association of Wheat Growers strongly supports HB 1199.  We thank Rep. Corry for his leadership and persistence on working on this issue.

This legislation has been before the committee previously and passed the House unanimously last year.  It stems from an unfortunate situation that occurred in Benton County a few years ago where DNR terminated four dryland agricultural leases with several years left on the leases.  The leases contained no penalties for DNR terminating the leases early. This was shocking to the farmers and caused them distress and financial hardship.  It also left the farmers distrustful of entering into new leases with DNR.

Fortunately, things changed for the better with a new commissioner at DNR and communication with DNR with farmers has significantly improved under Commissioner Franz’s leadership. Today, DNR stands in support of this legislation as it is fair and reasonable to both DNR and farmers who enter into leases with DNR.

If DNR enters into a lease with farmers, they must be held accountable and honor the terms of the lease.  If DNR needs to terminate a lease early under the best and highest use of the property, then it needs to compensate the farmers for the remainder of the lease.

As a farmer who currently has two leases with DNR, one of which our farm has had for over 50 years, I know how integral these leases can be to a farm’s operations.  Farmers need some certainty for the inputs they make to the land.

Thank you for hearing this bill and I respectfully urge you to pass it out of committee.”