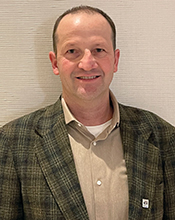 The newest member of the Washington Association of Wheat Growers’ (WAWG) leadership team, Anthony Smith, isn’t actually new to either WAWG or the industry.

Smith grew up on his family’s Benton County farm, which was settled by his grandfather in the early 1930s. The family grew dryland wheat and raised tree fruit and grapes. After graduating from Prosser High School, Smith took a job at Columbia Crest Winery, running the grape presses and blending wine. In 1997, Smith moved back to the farm full time, at first helping with the orchard operations before moving into the wheat side. He now runs the farm, which no longer includes the orchards, with help from his son, Lucas, and his father, Steve. He has been married to his wife, Karen, for 26 years. Besides Lucas, the Smiths also have a daughter, Madeline, who is pursuing a nursing career.

Smith was named WAWG’s secretary/treasurer at the 2021 Tri-State Grain Growers Convention in December. He has previously served as president of the Benton County wheat growers group and is chair of the WAWG Membership Committee.

“Growing up and seeing my grandpa and dad farm is what keeps me farming,” Smith said. “You have the freedom to make your own choices, and growing crops has always been exiting to me. You work at it, and then you get to harvest, and you are proud of what you accomplished.”

Smith grows wheat in the Horse Heaven Hills, one of the driest wheat-growing regions in Eastern Washington. Farmers there have had to tweak their farming practices, such as increasing seeding rates, to take advantage of what rainfall they do receive.

“A lot of farms up here have been here for generations, so we know how to weather the droughts,” he explained. “My dad suggested I become the wheat growers’ county president, so I did. When I got to WAWG, I learned a lot about the wheat industry, things beyond the farm itself. I like being a part of the association, and I want to see our industry move forward in a strong way.”

Before his involvement with WAWG, Smith said he wasn’t very aware of what was happening in the agricultural industry outside his farm, especially in the political world.

“There were so many challenges that I just looked past, but when I got involved in WAWG, I found out there are some big hitting things that can really challenge a farm,” he explained. “I’m excited to represent wheat farmers. WAWG brings together so many different people with so many different stories, but we all talk wheat, so I understand their language. It’s great.”

Smith just returned from his first trip to Washington, D.C., where he spent a week participating in National Association of Wheat Grower meetings and visiting with members of Washington’s federal delegation.