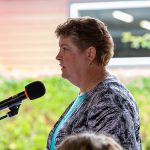 Marci Green, past president of the Washington Association of Wheat Growers and a Spokane County producer, joined more than 100 industry stakeholders at a recent House Agriculture Committee Listening Session on the 2018 Farm Bill. The listening session was in Carnation, Wash., and was hosted by Rep. Kim Schrier (D-Wash.). During her two minutes, Green talked about the importance of crop ... END_OF_DOCUMENT_TOKEN_TO_BE_REPLACED

What is the (Food and) Farm Bill and Why Does It Matter?

From the American Farm Bureau Federation Going back almost 100 years, the history of the farm bill largely tracks the history of food production in the United States as the legislation evolves to meet the needs of its modern-day constituents – farmers and consumers. Agriculture’s role in providing food security, and in turn national security, to the United States is ... END_OF_DOCUMENT_TOKEN_TO_BE_REPLACED

Crop insurance should be protected

July 21, 2022 Comments Off on Crop insurance should be protected

From Progressive Farmer Larger farmers would leave the crop insurance program if Congress went along with proposals to cap crop insurance premium subsidies or means test farmers, industry leaders told members of the House Agriculture Committee on Wednesday. Read the rest of the article here. END_OF_DOCUMENT_TOKEN_TO_BE_REPLACED

From the Capital Press Agricultural industry representatives have roundly criticized a pair of White House draft reports on breaching four lower Snake River dams, saying the documents fail to consider the greater impact on the environment and the economy. Read the rest of the article here. END_OF_DOCUMENT_TOKEN_TO_BE_REPLACED

USDA has issued over $4 billion in ERP payments

July 5, 2022 Comments Off on USDA has issued over $4 billion in ERP payments

On June 29, U.S. Secretary of Agriculture (USDA) Tom Vilsack announced that to date, agricultural producers have already received more than $4 billion through the Emergency Relief Program (ERP). This accounts for approximately 67 percent of the over $6 billion projected to be paid through this first of two phases of the ERP program. The first phase utilizes existing claim ... END_OF_DOCUMENT_TOKEN_TO_BE_REPLACED

From the National Association of Wheat Growers As Congress continues to review the 2018 Farm Bill and starts crafting the next farm bill, the National Association of Wheat Growers (NAWG) will be working with legislators to develop programs that will help wheat growers manage risk, ensure conservation programs work on the farm, and enhance U.S. trade that supports rural America. ... END_OF_DOCUMENT_TOKEN_TO_BE_REPLACED

Not much good news on ERP

By Paul Neiffer Farm CPA Today I just got off of a webinar with the North Dakota CPAs and the North Dakota FSA office dealing with the Farm Adjusted Gross Income (AGI) issues that CPAs and Attorneys have been dealing with since the program was announced a few weeks ago. I wish I could say it is all good news but ... END_OF_DOCUMENT_TOKEN_TO_BE_REPLACED

Agricultural producers who have not yet completed their crop acreage reports after planting should make an appointment with their local Farm Service Agency (FSA) service center before the applicable deadline. July 15 is a major deadline for most crops, but acreage reporting deadlines vary by county and by crop. Producers should make an appointment as soon as possible to avoid ... END_OF_DOCUMENT_TOKEN_TO_BE_REPLACED